Summit on the Lake 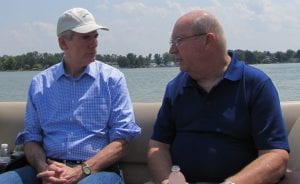 MILLERSPORT – “It’s good for a U.S. Senator to be out of Washington,” U.S. Senator Rob Portman (R-Ohio) told local, county and state officials at the August 1 Buckeye Lake Summit.

“This is a beautiful lake and a great place to fish and have fun,” Portman told the nearly four dozen officials participating in the hour-long summit in the marina’s showroom. He said the federal government can help with research and monitoring via satellites. “The federal government should be a better partner,” Portman added. 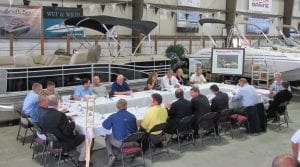 His comments demonstrated that he is a good listener. Portman said he hadn’t been focused on the nutrient contributions which feed algae from Canada geese. He quickly added, “I am a hunter.”

ODNR Division of Wildlife Chief Scott Zody outlined current efforts to reduce the lake’s large goose population. Geese, though most are now year-round Buckeye Lake residents, are still considered migratory and subject to federal protection. Zody said Ohio has pushed for more flexibility from the Mississippi Flyway Council that includes Ohio. He said some progress has been made. Last year, the season was extended a few days and the daily bag limit was increased by one bird. A short early season is scheduled in September this year. 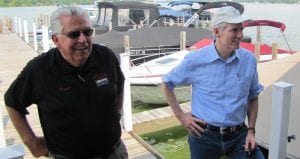 Zody said Ohio is continuing to push for a late season in late January or early February to deal with the large resident population of geese. Portman said he would support that effort. Zody said both access and opportunity are important for hunters. He added that more volunteers are needed to help addle goose eggs in the spring.

Licking County Commissioner Tim Bubb said, “ Perception is a big problem.” More education is needed to get people to stop feeding the geese.

Perry County Commissioner Jim O’Brien said the eastern end of the lake is filling up with sediment. “We’re not gaining anything on dredging.” 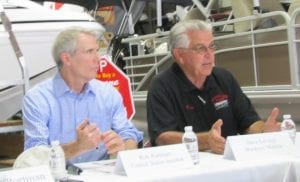 ODNR Deputy Director Gary Obermiller for Parks and Watercraft said two new dredges were purchased this year – one each for Grand Lake St. Marys and Indian Lake. A third new dredge will be purchased next year and it will be stationed at the east end of Buckeye Lake. A third dredge will be coming here next year from Grand Lake. “We’re ramping up our dredging efforts.” Right now, Bartholow said, there are sufficient sites to dewater the dredge material and to store it for moving it off-site.

Portman complimented Jonathan Ferbrache of the Fairfield Soil and Water Conservation District for inventorying and reviewing all 77 miles of watercourses that flow into Buckeye Lake. He said when the project began Buckeye Lake’s watershed was believed to be 49 square miles; it’s now considered to be 41 square miles. He thanked farmers and landowners for their cooperation during his survey last year. “There is no low hanging fruit at this time,” Fergbrache concluded.

Ohio EPA’s Russ Gibson, who managed the agency’s grant to Buckeye Lake for Tomorrow to develop a nutrient reduction plan, told Portman that neither Ohio EPA nor Ohio ODNR has a limnologist or fresh water specialist on staff. Portman will seek help from US EPA and the National Oceanic and Atmospheric Administration.

“I’m glad you retired early,” Portman told Bartholow. “Use us,” Portman offered. “We want to be part of it.”