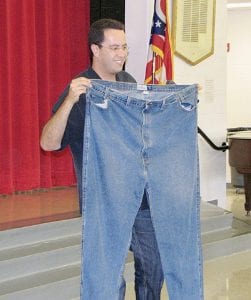 THORNVILLE- Most of us, at one time or another, have watched television, played a video game, or ordered junk food. Jared Fogel, best known as the “Subway Guy,” took these habits to whole new level. Fogel, who tipped the scales at 425 pounds before losing 245 pounds by eating two Subway sandwiches a day and exercising, spoke to Thornville Elementary School students the afternoon of Oct. 4. The stop at Thornville Elementary was part of a Northern Local School District tour for Fogel, which included a visit to Sheridan High School that morning.

Fogel told Thornville Elementary students that until the third grade, he was just like any other active child; he participated in sports and had plenty of friends. All that changed, however, when he got his first Nintendo home video game at eight years old. “To me, it was huge. I was so excited!” he said. He couldn’t get enough Nintendo. Fogel said he spent up to seven or eight hours per day playing. About this time, he also developed a passion for junk food. “I’d have one hand on the controller and the other in a bag of chips,” said Fogel. Virtual reality soon replaced all the sports he loved and his weight skyrocketed to where he couldn’t fitinto a movie theater seat. His doctor and family begged him to stop being overindulgent, but to no avail. “The one person who didn’t care was me,” he said. “I was a complete mess because I was so heavy.”

Fogel said he rejoiced at receiving his driver’s license, because suddenly he had limitless access to junk food. However, he became so large that it was difficultto drive. Eventually, he developed apnea–a sleep disorder–because the weight of his double chin and neck blocked his breathing as he slept.

His struggle with obesity continued into his college days at the University of Indiana, until one day he couldn’t take it any more. After the presentation, Fogel said, “It had been building up for years. It was just a lack of living, really.” He walked into a Subway sandwich shop next door to where he lived and read a kiosk explaining the low fat content of the sandwiches. “A light bulb went off in my head,” he said. “All the stars aligned.” He figured if he ordered half a turkey sub for lunch and a full veggie sub (none of the subs he ordered had cheese or mayonnaise) for dinner indefinitely, he would lose weight.

And that’s what he did.

In three months Fogel lost 94 pounds which was enough that he could begin walking for half an hour every day. After a year, he’d dropped a staggering 245 pounds. A friend who was a reporter for a campus newspaper was so impressed that he wrote a story about Fogel’s plight. The story found its way to the owners of the Subway company, who called Fogel and asked him to do one commercial. The rest, as they say, is history.

“Here we are, nine years later,” he said to the Thornville Elementary s tudent s . In addi t ion to continuing to make commercials, Fogel tours the world trying to convince young people to be conscious of their health and not to make the same mistakes he did earlier in his life. There’s nothing wrong with television, video games, and occasional fast food, he said, as long as they’re all enjoyed in moderation.

Three Sheridan High School seniors had their own opinions of Fogel’s Wednesday morning presentation at their school.

“I thought it was pretty inspiring,” said senior Kelsey Howell. She thought his message may be lost on elementary school students, however.

Senior Olivia Noyes, who coincidentally works at Subway, quipped, “The younger kids would just be excited that someone famous is there.” Howell and Noyes agreed that the girls of Sheridan High School are far more conscious of their weight and appearance than the boys are.

“We have some girls here who really worry about it,” said Noyes. But, Howell added, “they’re thinking skinny, not healthy.” Both agreed it’s tougher to eat healthier when dining with friends. Everyone just seems to eat more when in a group, they said, and inevitably someone pops open a bag of chips.

Noyes said many people come to the Subway where she works and order nearly the same thing almost every day, but to her knowledge no one is trying to follow Fogel’s unusual diet plan.

Senior Sierra Dawson, who was Fogel’s guide during his visit to Sheridan High, said Fogel seemed sincere in what he was saying to her and her classmates, and he seemed like a nice guy. “I loved his old pants,” said Dawson, referring to the size 60 denim rigs Fogel wore at his heaviest and proudly displays for audiences. But, even though Fogel currently wears a size 34, “He looks skinnier on TV,” she said.