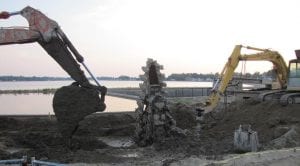 Building the Phase II buttress wall is now literally bogged down. Phase II work began about 90 days late. ODNR changed the original plan to have four soil-mixing machines build the buttress wall to just one custom-built Dewind trencher that was supposed to build the 10-foot wide wall in one pass. That machine’s start-up has been difficult. In it’s two months on the job, it has constructed a short test area on the Lieb’s Island staging area and a 500-some foot test strip on West Bank. Work started this week on a short section of the buttress wall between the northeast side of Sellers Point spillway and the causeway. It had gone about 30 feet until its cutter arm got stuck in the trench around 2 p.m. Tuesday. The trencher minus its cutter arm moved back to Seller’s Point, leaving about half the length of the arm stuck in soil mixed with concrete. Workers have now spent a total of about 20 daylight hours since then trying to remove the cutter arm with no success. Clockwise from top left: A hydraulic excavator tries to keep the concrete-laced soil loose while a smaller excavator drills around the stuck cutter arm; the excavator tries pushing and pulling against the cutter arm to try to wiggle it free; the stuck cutter arm looks like some kind of mechanical monster emerging from the berm; and a worker places caution tape around the cutter arm as they give up a little after 8 p.m. Wednesday. Beacon photos by Charles Prince. 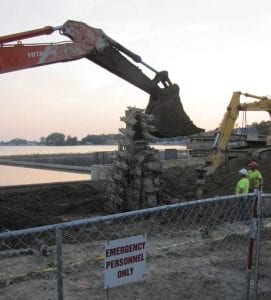 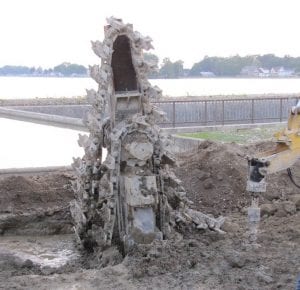