Status of Hebron conditional use request is uncertain 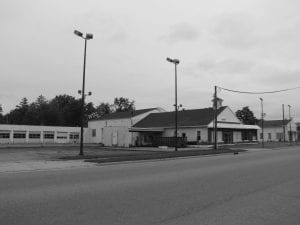 Ina3to2vote,boardmembers approved a conditional use request from U.S.T. Environmental Contractor, Inc. to allow overnight commercial vehicle parking at 130 W. Main Street – the former Bowman Chevrolet dealership – as long as the environmental cleanup firm’s large “roll off” containers and trucks larger than one ton are stored indoors, and all truck access to the property is from W. Main Street. Board members Wayne Carruthers and Bill Wright voted “no.”

However, U.S.T. President Barney Cook told board members that parking all his vehicles indoors simply isn’t practical. “It’s not worth it,” he said.

Mason said the point may be moot, anyway, because he’s checking with Village Solicitor Wes Untied to determine if the vote was even valid. The first two motions were rejected.

Following the second vote, Community Development Coordinator Linda Nicodemus told board members that if the board took no action, U.S.T. could proceed as if the conditional use were approved without conditions.

Kline said the majority of community members who have spoken to the village were against approving U.S.T.’s conditional use. Mason said he simply favored storing vehicles indoors and he didn’t understand objections to leaving all the buildings on the site intact for vehicle storage and creating covered areas for storage.

Mason disagreed with Nicodemus and thought the board took action with its two previous votes, but moved to vote a third time, anyway, and the conditional use was approved.

“I welcome U.S.T. I think having U.S.T. in town is a good thing,” Mason said. But, he believes equipment should be parked inside to preserve the village’s appearance. He said he would feel bad if U.S.T. is unable to park its vehicles inside, but so be it. “If he can’t do it, I’m sorry,” Mason said.

Mason said he was confused by the third vote and believed the first two votes were sufficient, and he doubts the conditional use was approved. “The second vote is likely most important,” Mason said, adding that community members were clear they did not want to see large items, such as trucks, stored on Main Street, right downtown.

Monday night’s meeting was the third time the Board has discussed the request. U.S.T. first presented its request at the Board’s regular monthly meeting on July 6. The family-owned company has facilities in Baltimore (on Ohio 37), Cleveland and Logan. Its core services are environmental remediation, emergency spill response and industrial services. For example, it was called to cleanup the ethanol spill and subsequent fire that seriously damaged an I-270 overpass on the west side of Columbus. U.S.T. does not treat or transport hazardous waste.

The former dealership is zoned General Commercial which only allows for overnight commercial vehicle parking with a conditional use permit.

Operations manager Burbridge Cook II, the son of founder Barney Cook, said less than 20 vehicles would be parked on the site. They include three box trailers, three tractor units, two roll-off trucks, vacuum trucks and seven roll-off waste containers. The existing red barn along 6th Street will be moved off-site. Most of the property would be fenced with a six-foot high wooden stockade fence running along 6th and North streets. Entrance to the storage yard would be off 6th Street.

Several neighbors objected to storing this type of equipment in the center of town. Mason expressed concern about the ability of tractor-trailer units accessing the property from 6th or North streets.

Board members convened a special meeting last Thursday in an effort to work out some of their concerns and those expressed by neighbors. North Street neighbor Jerry Price said, “I don’t know if this is the right place for this type of business.”

Erna Holland, co-owner of the Custom Living Solutions complex on West Main told board members that U.S.T. should have to follow the same guidelines put on them five years ago. She noted that their garages had to be put behind the facility. “Take a look at what you imposed on us,” she said. “We have a better project for it.”

“I never imagined there would be so much opposite,” Barney Cook said Thursday.

“We are open to the right type of development,” Mason responded. “My concern is for the aesthetics and traffic. That’s not what I want to see on Main Street. I would approve inside storage in a heartbeat.’

“Your equipment in the middle of town is not we need here,” Marietta said. “A wooden fence won’t look good.” He added that he will oppose the permit.

Mason suggested approving the permit conditioned on storing all vehicles and containers inside and having trucks enter from Main Street.

Kline, who is an adjacent property owner, said he doesn’t want another roof on the property adding additional runoff to an area already susceptible to flooding. The truck parking doesn’t bother him, but he doesn’t want to see truck traffic on North Street. Carruthers said he agreed with Kline on no more rooftops.

“I’ve looked at a crappy lot for so long,” Kline added. “What type of conditions do you set to appease people?”

Cook said he would love to have all the equipment inside, but couldn’t and wouldn’t promise it.

Mason said what he saw when he looked at their Baltimore area facility is “not what I want to see in Hebron.”

“I would like to move forward with conditions,” Mason added. “No dumpsters and equipment outside.”

“We’re probably finished,” Cook responded. “I’m out of ideas…I want to be here. We don’t want to dirty it up. We want to be good neighbors.”

He asked for suggestions other than adding a building. Cook agreed to move the primary truck access point from 6th Street to Main Street.