Someone you should know: Barb Clark 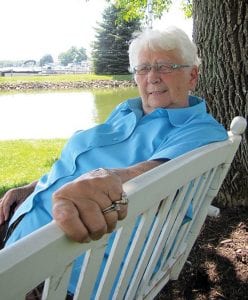 Lake Area Resident Since: Birth in Pleasantville; since 1956 in Millersport.

Claim to Fame: A retired teacher, she started the community’s well-known White Christmas program in 1967.

What She Loves Most About her Community: “The friendliness, and the way people look out for each other.”

Most People Know: She loves to play…golf, euchre, ANYthing.

Hardly Anyone Knows: “When I was in high school and college I was a little, scared country girl. Everyone thinks of me as willing to try anything, but there was a time I was just hesitant and afraid.”

MILLERSPORT – “Work hard at whatever you do and be honest.” It’s solid advice that thousands of Barb Clark’s former students would recognize from a teacher who reached out not only to influence lives in the classroom but to make a difference in the community she loves.

Her name has become synonymous with the school’s White Christmas program, which provides gifts and food to families in need each year, as well as fruit baskets to senior citizens.

“I shouldn’t be the one who gets the credit,” Clark insists. “It’s the students, the organizations and the individuals who have helped make it happen every year that should be recognized.”

Clark has certainly seen the program grow over the past four decades. What began with two of her home economics students making a commitment to help a younger student in need turned into a sweeping school-community partnership that provides holiday assistance to dozens of needy families and fruit baskets to more than 100 senior citizens every year.

Everyone lends a hand. Elementary students bring in canned goods, money is contributed by town residents and PTO, and the Millersport Lions Club helps in any and every way possible, Clark said. “I was once at a funeral and a young man came up to me and told me he remembers one winter when he was in high school, he got a new coat and a pair of shoes and said he would never forget it. If there’s a reward involved for any of us, it’s something like that.”

Many who knew Clark during her 30-plus years in education might be surprised to learn she originally studied fashion merchandising at The Ohio State University. After a year as a buyer in New York City, she got married, returned to Millersport and received an interesting offer from the school: they needed a home economics teacher.

“When they came and asked me about the job, I had no plans to be a teacher,” she said. When she started in 1956, Clark said she was the only female teacher in the high school and, as such, “got a lot of extra duties.” She supervised the lunch program from the time she started teaching there through 2002, though she retired from the classroom in 1989.

She also started the senior class steak booth at the Millersport Sweet Corn Festival in 1960, which is still one of the most popular food booths at the festival, the proceeds from which are responsible for sending graduating seniors on elaborate class trips.

“I’ve planned 25 senior class trips and chaperoned 20 of them,” Clark recalls. She’s had groups go to New York City, Washington DC and Atlantic City, Disney World and, now, Disney cruises. She credits the Lions Club for allowing local groups to earn money from booths at the Sweet Corn Festival. “It’s one of the great things about a small town,” she said.

She was married to John Clark, postmaster in Millersport, who passed away in 1980. Her son and daughter, John (Paula) Clark and Elizabeth (Joe) Arnold still live nearby, and she spends a great deal of her time following the activities of her three granddaughters.

Her retirement is full of cooking, golf, euchre, rest and fun wherever she can find it.

“Thankful.” It’s another word embedded in almost everything Barb Clark talks about, if you really listen. She’s thankful for her teaching mentors from many years ago, for her town, for her former students and their parents, for her family, for her family’s health and happiness.

If you ask if there’s anything else she wants to talk about, her reply is simple: “I’m thankful for the good life I’ve had. “ And, so saying, she really says it all.

Editor’s Note: This is the first
of a semi-regular feature that will
highlight community members
we all wish we could introduce
everyone else to. They are the
people who make small towns
great.

So send or call us with your
suggestions for someone we all
should know to charlesprince@
buckeyelakebeacon.net or 740-
928-5541.