Some old, some new in Fairfield County 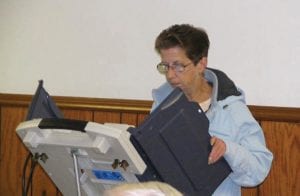 LANCASTER – Liberty Township voters turned back the pages of time and elected 20- year veteran Trustee Dave Keller back to office after he was voted out four years ago. Trusteeelect Randy Kemmerer won the second open trustee position. In 2003, current trustees Nancy Montell and Tim Linkhorn upset Keller and former Trustee Keith Taylor, however this time Montell was voted out and Linkhorn didn’t seek another term since he is leaving the area.

“We can do more on the fiscal responsibility side,” said Keller. He wants to eliminate the township administrator’s position, improve the township’s meeting facility, and pursue state grants once he returns to office.

“We’ve got to get our zoning straightened around,” said Kemmerer, who is Walnut Township’s road supervisor. He said he’s aware of drainage problems around Liberty Township and he’s looking forward to blacktopping tow nship roads. However, Kemmerer wants to discuss future plans for the township with Keller and Trustee Ivan Ety. “We need to sit down and hash things out,” he said. 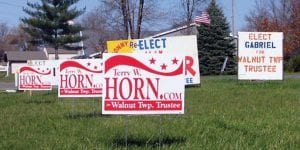 On the Walnut Township School Board, incumbent Carol King retained her position with 1049 votes and board memberelect Tom Cumbow defeated candidate Sandra K. Lines 742 votes to 551 for a second school board position. John Slater II did not seek reelection.Voters renewed the district’s five year 2.1 mill emergency levy by a 949-677 vote.

“I want to build bridges with the community,” Horn told The Beacon Wednesday. “I will do my best to serve the community to the best of my ability and to be accountable for the decisions I make.” Horn decided in early July to make his first bid for office. “I saw there was a need and though I could add some value to the process.”

Township voters agreed to turn the township’s last five year fire levy into a permanent levy. The one mill replacement levy was approved by a 1,413 to 822 tally. Walnut Township now has permanent fire levies in place totalling six mills.