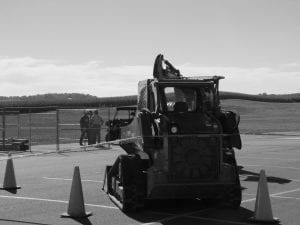 HEBRON – After years of enduring hurdles and delays, work has begun on installing two solar array clusters that will power Lakewood High School and the two intermediate buildings.

“I’ll tell you, it’s been a struggle,” said Lakewood School Board member Bill Gulick. He said the district faced several hurdles throughout the process, but as of Monday, those hurdles were overcome and the project is moving forward. Installation should be completed by Dec. 1. Completion date is slated for Dec. 1.

“We’re on the path,” Gulick said. “It’ll definitely help us save some money. That’s why we’re doing it.”

In February 2013, Lakewood School Board members agreed to begin working with Solar Planet Company on a solar power purchase agreement, or PPA, to purchase roughly 60 percent of the district’s power needs from a Solar Planet-installed solar facility.

The agreement revived plans to use the projected savings from the solar project to repay a loan to finance the replacement of old and inefficient windows in the middle school. In 2012, board members unanimously authorized Superintendent Jay Gault to enter into a 20-year power purchase agreement with Dublin based Tipping Point Renewable Energy. Though the solar project didn’t require a cash investment from the district, solar panels would cover acres of district property. The project’s economics were based on federal tax credits for high-income investors and renewable energy mandates. Tipping Point was unable to secure enough investors and backed out of their contract proposal. When the district secured an attractive electricity price on the open market, it appeared that solar power would be on hold indefinitely.

However, Solar Planet revived plans for solar power but struggled for months to reach an interconnection agreement with AEP. An agreement was reached in December and installation of the solar was expected to begin last March. AEP ’s concerns about safety and other operating procedures pushed the start date back further.

Gault said the most recent delay was an AEP impact study. While the delay was frustrating, Gault said he understood its importance. He said AEP had to determine if safeguards were in place to protect AEP employees from electrocution following a power outage. Gault explained that in the event of an AEP power outage, the school district’s solar array would begin generating electricity and supplying it to AEP’s grid as soon as the sky cleared following a storm, regardless if AEP still had people repairing power lines.

Gault said the solar array could potentially electrocute AEP workers who are servicing power lines while trying to restore power.

Gault said Wednesday that all the potential safety issues were resolved and there would be no delays, barring bad weather dur- ing construction.

“The hold up was just a lot of engineering stuff,” Gault said.

Gulick said workers are staging the arrays this week, including bringing in construction equipment, erecting safety fences, and mapping out where the solar panels will be mounted to the ground. He said the steel posts that support the solar arrays will be installed beginning Monday.