Soil mixing progress to speed up 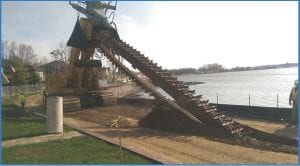 Wednesday, March 23, turned out to be particularly noteworthy for the dam replacement project.

First, the 4.1 mile long stability berm was completed Wednesday morning. Now a 30+ foot wide roadway has been built in front of the existing embankment. The only gap is the 20 foot wide channel cut last Monday night in front of the AMIL Spillway in Buckeye Lake Village.

That channel allows lake water to reach the spillway’s underdrain and our summer boating season has been gushing out since then. The lake level topped out slightly above 889.50 (nine inches above ODNR’s new ‘winter pool’) Monday, March 14. Wednesday, it had dropped to just above 888.50 (about three inches below ‘winter pool’), with water still gushing out of both spillway underdrains.

It is important to note that the most important part of Phase 1 construction is only about 10 – 15 percent complete. The stability berm just serves as the platform to construct the two-foot wide and approximately 40-foot deep seepage barrier. Phase 1 won’t be complete until that seepage barrier extends the entire length of the stability berm. Completion had been projected for early June, but that deadline has looked increasingly unrealistic. 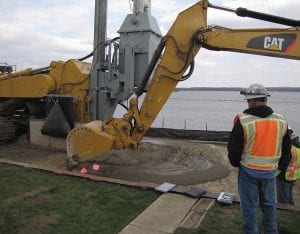 Two augar-type soil mixing rigs are working from both ends of the enbankment with mixed results. Both rigs had slow starts. The Lieb’s Isla nd r ig has now been working a month, with some good weeks and some very slow ones. The North Shore rig after nearly two weeks is still several days away from reaching the yacht club.

But there’s good news on soil mixing too. A third soil mixing rig started work just east of Mud Island Wednesday afternoon. It has a 50-foot long chainsaw-like blade that cuts through the soil while mixing it with grout.

The top cover photo, courtesy of project spokesperson Ian Nickey, shows the two-foot wide chainsaw blade beginning its first cut Wednesday morning at 13482 West Bank Drive. It will be moving east toward the North Shore. It will operate 24 hours a day up to seven days per week. 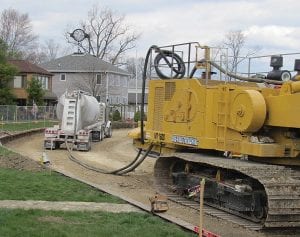 The one-pass trencher was designed and built by Dewind Trenching from Holland, Michigan. It appears to have several advantages in terms of efficiency over the Riato augar-type rigs.

First, the entire 40-foot deep trench is being mixed at the same time through the constant movement of the chainsaw-like blade. On the augar rigs, only three to four feet of the trench are being mixed at any one time with the three-augar heads having to be raised or lowered. to mix the entire depth. The chainsaw-like bar stays in the soil unless it hits a buried object or needs maintenance.

The augar rigs must work on top of steel plates to keep the 50- foot high rigs from sinking into the berm and perhaps toppling over into the lake or a home. Moving the heavy steel plates from behind the augar to in front of it required another excavator and was very time consuming. 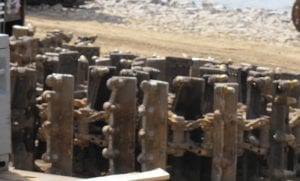 Grout bubbles out of the top of the trench with both rigs. However on startup, the grout coming out of the chainsawed trench was much drier and resembled concrete coming out of a delivery truck. At this point, there appears to be no need to build settling lagoons along the embankment to get the grout dry enough to manage.

The Dewind trencher is hooked up to a bulk tanker for its admix which is mixed with water in the gray silo on the front of the machine. The tractor trailer rig simply moves ahead of the rig. That direct connection keeps the supply lines relatively short, minimizing clogging and the need for another piece of equipment to drag the ever lengthening supply lines.

There is one very noticeable disadvantage with the Dewind rig. It is considerably noiser than the Riato augar by several orders of magnitude. It sounds like a diesel locomotive at full speed and ear plugs are a necessity for anyone nearby outside when it is operating.

Nickey said there are too many factors that can affect performance to provide estimates or how many feet this trencher can average in a day. Four small drill rigs for core sampling are operating ahead of the new mixing rig. That’s appears to be a major increase in sampling from what was or is being done in front of the augar rigs. The increased data on subsurface soil and water conditions may account for why the grout bubbling out of the trench is much drier and easier to handle. 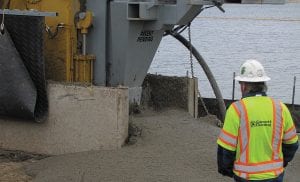 Phase 1 will be done when the seepage barrier extends the entire 4.1 mile length of the embankment. Once ODNR’s Dam Safety Unit reviews its effectiveness and signs off on its construction. ODNR will allow water levels to increase to allow boating to resume. A specific level has never been mentioned, but many expect or hope it will be no more than one foot below summer pool.

The soil mixing rigs will have to make at least one more pass along the entire embankment to install the bulkhead wall. That work won’t be finished until 2019 which means dam front docks won’t return until then.