Soil mixing is next step 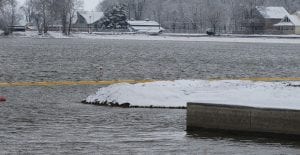 BUCKEYE LAKE – Winter’s late arrival this week with three days of snow heading into a very cold weekend appeared to slow work on the dam itself.

Activity continued at both staging areas with the North Shore particularly busy. Dozens of trucks – sometimes with five or six on the site at the same time – were rebuilding the bank run stockpile nearly exhausted by berm building last week.

The Lieb’s Island berm crew is about half across the channel for the Seller’s Point spillway. Concrete culvert pipes will be placed under a portion of the berm to allow water to continue reach the spillway and its underdrain.

Two massive soil mixing augers are being assembled at Lieb’s Island and the North Shore. Assembly looks nearly complete at Lieb’s Island where work has also started on the first of three batch mixing plants that will be placed along the berm. The plants will mix the cement-based additives that will be mixed with the bank run to form the columnar seepage barriers. Each soil mixer can drill three-36 inch holes at the same time, according to project spokesperson Ian Nickey. “The augers will bore down to a depth of approximately 40 feet and mix grout with the in-place soil material. The design width for the (seepage) cut-off wall is 24.” 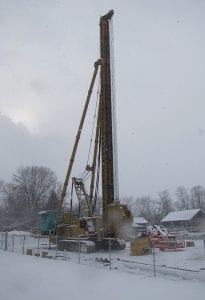 He continued, “It is important to note that Phase Two construction will also include the use of the same or similar technology to construct the supporting buttress structure connected to the cut-off wall.”

Each soil mixer can do 150 feet per day. If that rate can be maintained without any significant breakdowns or weather delays, it will take 72 days or 12 weeks working six days per week to complete the seepage barrier for the entire 4.1 mile dam. 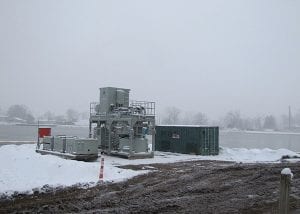 The soil mixing subcontractor is Raito Geotechnical Constructors of Hayward, CA, a subsidiary of Raito Kogyo Co., Ltd which is one of Japan’s premier specialized construction companies. 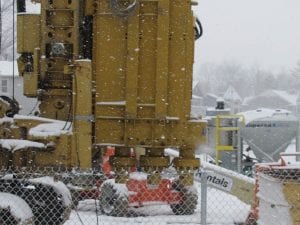