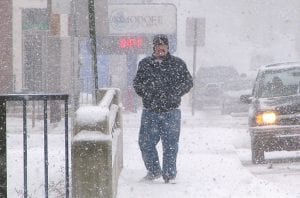 MILLERSPORT- Janet Johnson, owner of the Millersport General Store and Upper Deck Coffee House, would love snow if it weren’t so cold. “Really, snow’s fine. It’s driving in it I hate,” she said, while sweeping a couple inches of

freshly fallen powder from the sidewalk in front of her store.

Many drivers could relate to Johnson as they contended with slick roads and low visibility Tuesday morning while one of this season’s few significantsnow falls (so far) blanketed the Buckeye Lake Area. Unfortunately for local school children, the snow didn’t fall in time to close schools for the day. In fact, by late morning, the skies cleared and the sun shone, although more cold and snow are forecast into next week. 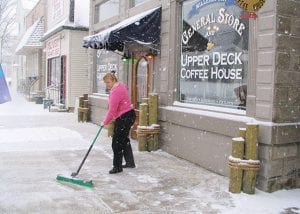