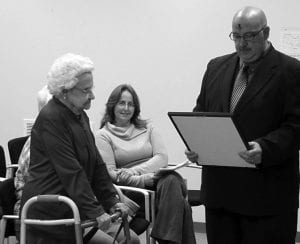 Hebron Mayor Clifford L. Mason reads a proclamation honoring Hebron resident Dorothy “Dotie” Wells on her 100th birthday. Mason said Wells, “Touched the lives of thousands of Ohio residents through her 40 years of serving countless meals in numerous restaurants…and has the very special ability to make every person who knows her, proud to share their friendship.” Beacon photo by Charles Prince.

For the last four plus years, Snavely as been the Licking County Commissioners’ Deputy Clerk for Budget/Finance. Her responsibilities include developing, monitoring and maintaining the county’s multi-million dollar general fund budget. Snavely has more than 18 years experience in government. She starts the $50,000 per year position March 19 and will serve a one year probationary period.

She was one of 17 applicants for the position. Five candidates were interviewed in the first round which was pared down to three for second round interviews.

In his report, Police Chief James Dean said Licking County is merging the fire and police dispatch centers. The merged center may switch to the 800 MHz Public Safety Spectrum which allows police and fire personnel to talk with each other statewide. The public safety spectrum came out of the communication failures in New York City on September 11 when police warnings about an imminent collapse of one tower weren’t heard by firefighters, Dean said.

The benefits are obvious, he said, but it would require the department to replace all radios. That will cost about $70,000 just for the police department.

Right now the county provides free dispatching for both fire and police. The county is trying to figure out how to pay for the new dispatch center and its equipment. One option is a user fee that could be as much as $18 per dispatch.

“We’re going to have to go to this,” Mayor Clifford L. Mason added.