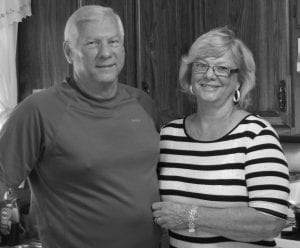 Nelson and Jeri-Lynn Trimmer are looking forward to seeing their old friends perform at the Sweet Corn Festival.

MILLERSPORT – They just seem to keep running into one another.

Millersport graduate Nelson Trimmer, Jr. was thrilled to hear Larry Gatlin and the Galtlin brothers are headlining the Millersport Sweet Corn Festival this year, especially since he and his wife, Jeri-Lynn have a long history with the Gatlins.

Trimmer was transferred through his job to Brentwood, Tennessee, the Gatlin Brothers’ home. Trimmer became a softball coach and his team would play Larry Gatlin’s wife’s team. Later, he coached the Gatlins on an adult team. “My assistant coach was (Larry) Gatlin’s CPA,” Trimmer said. The parallels didn’t stop there. Trimmer played with the Gatlin families on an adult volleyball team for several years. “We won the championship every year,” he said. Trimmer’s daughter was Larry Gatlin’s daughter’s nanny.

Trimmer and Jeri- Lynn, would often run into the Gatlins at church in Tennessee.

“They’re all great Christian performers,” said Jeri-Lynn of the Gatlin Brothers and their sister, LaDonna Gatlin.

“(The Gatlin Brothers) coming to Millersport is really quite a coup,” Nelson Trimmer said. “They’re about the largest act the Sweet Corn Festival has had.”

Trimmer said he’s seen the Gatlin Brothers perform several times and he’s particularly impressed with their ability to singon the spot any gospel song the audience shouts to them. Most of the time, Trimmer said, the brothers won’t even look at each to decide what they are doing. They just launch straight into the song without missing a beat.

“We’ve always admired the way they’ve lived,” Trimmer said, and their ability to balance fame and touring with family life and religion. Jeri-Lynn said the Gatlin Brothers’ spouses would remain at home and raise their children out of the spotlight and engrossed in the same school and community activities any family’s children would do.

Trimmer said it seems like the wildest coincidence the Gatlins would travel to Millersport not long after he and wife returned to live there a short time ago. With any luck, Trimmer hopes he has a chance to say hello to Larry Gatlin when he’s not on stage. “He is a tremendous voice,” Trimmer said.

Larry Gatlin and the Gatlin Brothers will appear at the Millersport Sweet Corn Festival at 8:30 p.m. on Saturday, Sept. 5. Admission is free with paid parking.