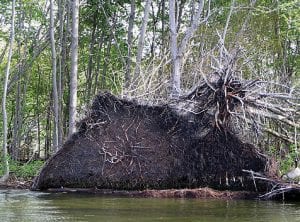 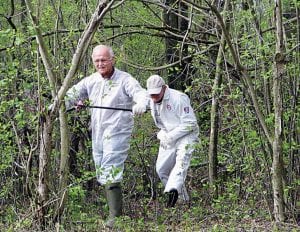 Invasive species take on a special meaning on Cranberry Bog. Here the focus is on preserving non-native plant life, such as rare orchids, cranberries and carnivorous plants, that were brought here from Canada by a glacier.

Much of the work involves cutting back and removing the growth of poison sumac which requires special precautions. Both years, the Buckeye Lake Historical Society and The Dawes Arboretum have provided disposal coveralls and gloves to minimize contact with poison sumac. 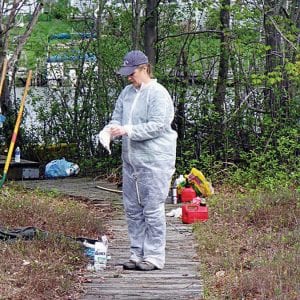 A quick boat trip around the bog showed how fragile it is. Last September’s Hurricane Ike windstorm and winter winds toppled nearly a dozen trees. Each tree, and several were quite large, took with it a chunk of the sphagnum moss mat, accelerating the breakup of the unique floating bog. On a more positive note, there were considerable signs of new moss growth in the main meadow that had been cleared last April. Once the invasive species are removed, sunlight can reach the moss, allowing it to grow. 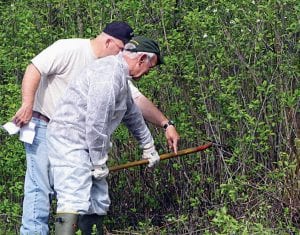 There is still time to help out this Saturday. Volunteers will be attacking the West Meadow from 9 a.m. to 2 p.m., meeting in the Buckeye Lake Yacht Club parking lot. Rubber boots and old clothing are a must. Water will be provided, but you might want to bring a small lunch.

For more information, call 928-1274 or email O’Donnel at godonnel@arshot.com. 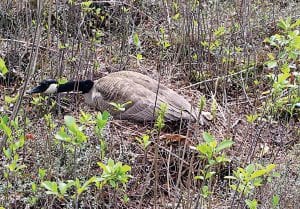 If you would like to visit the bog, you can participate in DNAP’s lottery for the bog’s annual open house or arrange a special tour through the Buckeye Lake Museum. This year’s open house is from 9 a.m. to 5 p.m. on Saturday, June 20.

Attendance at this popular open house is limited in an effort to protect the bog’s delicate sphagnum moss surface. Anyone interested in touring the bog on June 20 should send a postcard to the Division of Natural Areas & Preserves, 2045 Morse Road, F-1, Columbus, Ohio 43229. Postcards must be postmarked by May 31 and contain the following information: contact name, address with zip code, daytime phone number and total number of people in the party (not to exceed four). Only one postcard will be accepted per family.

The lottery drawing will be held in early June and winners will be notified by mail. Walkin visitors are welcome to attend, however, they will not be guaranteed a time slot. Boat transportation to and from the island will be provided by the Greater Buckeye Lake Historical Society for a donation of $5 per person.

Call the Buckeye Lake Museum at (740) 929-1998 for more information about a special tour of Cranberry Bog.