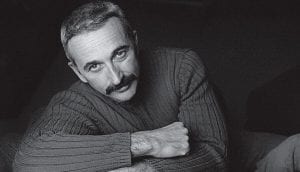 MILLERSPORT – Aaron Tippin gained his success the old fashioned way; he earned it.

The talented singer/songwriter – who headlines the Millersport Sweet Corn Festival this year – worked a midnight shift at a Kentucky factory early in his career, then commuted to Music Row in Nashville to write songs during the day- every day.

“I’d get up at 10 o’clock at night, work ’til daylight, drive to Nashville, come home, work out, go to bed, and do the whole thing over again the next day,” said Tippin in an interview with The Beacon. All the hard work paid off, however, as artists like Mark Collie, Diamond Rio, David Ball, and the Mid-South Boys began recording his songs.

There’s nothing too spontaneous about Tippin’s writing process. “I write according to a hook or a title,” he said. “That bell goes off in your head.” For example, he and his wife, gospel singer Thea Tippin, were cooking in the kitchen one day. “She wasn’t measuring stuff right and I’m a real backseat cook,” said Aaron Tippin. He made a comment to her that wasn’t received well. Thea looked at her husband and said, “Kiss this,” pointing to part of her anatomy. Then she said, “Y’know, that sounds like a song title.” It wasn’t long before “Kiss This” became one of Tippin’s major hits.

Generally, Tippin enjoys cowriting with other artists and insists upon letting the melody, not necessarily the lyrics, drive the tune. He’s earned his reputation with such hard-core honky tonk songs as “Working Man’s Ph.D.,” “You’ve Got to Stand for Something,” and “There Ain’t Nothin’ Wrong with the Radio.”

When asked if he prefers songwriting to performing, he said, “That’s tough.” He loves live shows, but then again, he loves writing songs, too. “Both are good,” said Tippin. Hearing himself on the radio for the first time is something he’ll never forget. He said “years and years ago” he recorded a song called “Next Exit Out of Love” and presented a recording to a disk jockey at an out of the way studio in the mountains. Tippin didn’t really expect to hear it played any time soon, if it all. He assumed the disk jockey received dozens of recordings daily. Tippin was still driving home when he heard his song played.

Tippin performed his first Nashville nightclub show in 1990, which earned him a recording contract with RCA records. Before his first tour, joined comedian Bob Hope on a USO tour to Saudi Arabia during the Gulf War. After Tippin came home, hits for RCA led to concert dates with such superstars as Brooks & Dunn, Reba McEntire and Hank Williams Jr. Tippin became one of the most memorable country personalities of the 90’s. His hits sounded like no one else’s; “My Blue Angel”, “That’s As Close As I’ll Get To Loving You” and “I Wouldn’t Have It Any Other Way” formed a body of work to- tally individual and in direct contrast to the sound-alike records that characterized the era.

Five of his RCA albums became Gold Records and one went Platinum. Between 1990- 1997, Tippin scored six hits records including tunes like “Call Of The Wild,” “I Got It Honest” and “Whole Lotta Love On The Line”. He appeared on the soundtracks of such films as “The Beverly Hillbillies” and “Fire Down Below,” and became the commercial spokesman for Channel Lock Tools. Success as a songwriter for others also continued as Garth Brooks, Charley Pride and Kenny Chesney recorded Tippin tunes.

Aaron and Thea married in 1995. In 1997 they welcomed Theodore Tippin into their lives and son Thomas arrived in 2000. Tippin also has a grown daughter Charla from his first marriage; Charla is married to Kenneth, a Blackhawk pilot in the S.C. Air National Guard and they reside in South Carolina.

Tippin signed with Lyric Street records in 1998 and scored back-to-back hits with “For You I Will” and “I’m Leaving”. His popularity spiked again in the new millennium thanks to the aforementioned “Kiss This” and “Where The Stars And Stripes And The Eagle Fly” as well as his sixth gold record and first ACM award nomination.

In 2002, touring took on new meaning for Tippin when he traveled to Afghanistan. Since then he has been making annual visits to our forces in Iraq and became the celebrity spokesperson for the Paralyzed Veterans Of America, the Armed Services YMCA–which takes care of military families while their spouses are overseas–and Toys for Tots which the Marines founded. At every show, Tippin assembles a bike on stage while performing. At the end of each night, he invites a Marine up and donates the bike to the children of the local community for Toys for Tots. Tippin has donated over 500 bikes. He first learned of Toys for Tots when he was a guest on a Cincinnati radio station. “I really got inspired,” said Tippin.

After a three-year break from recording, Tippin is ready to share a new CD called “Now & Then” with his devoted fans and catch some new ears along the way under his own recording label-Nippit Records. He left Lyric Street Records in 2004. “The time had come to part from the label,” he said. “We didn’t see eye to eye. There were no hard feelings, but it was like getting released from prison.”

Free to record on his own, Tippin released a CD of classic country songs available only through Cracker Barrel restaurants. “It’s a bunch of songs that my used to like to hear me sing,” he said. Also in the works are a CD geared for truckers and a Blue Grass project.

When the busy performer isn’t touring, writing, recording, bodybuilding, flying airplanes, or hunting, he enjoys winemaking with his wife in their own vineyard. When asked what he likes best about winemaking, he said, “We love drinking it!”