Buckeye lake Council finally gets something done this year! 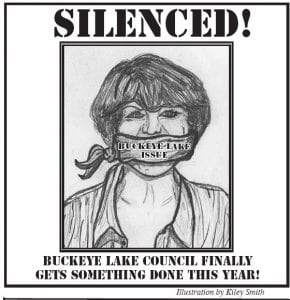 Wow! Buckeye Lake Village Council members aka The Gang That Can’t Shoot Straight, The Get-Along Gang or The Do Nothings – pick whichever nickname you like; they all fit – finally took some decisive action Monday night. Yes, the group that can’t get anything done for us (anyone see the grant-funded community gardens?) finally got something done. It took them less than 10 minutes to punish council member Peggy Wells. She is not permitted to speak or vote at three regular council meetings starting with last Monday night’s meeting. She is permitted to answer the roll call and provide a committee report.

Yes, village elected officials, including some that couldn’t be bothered to make sure residents and visitors were receiving the emergency medical assistance they deserved, managed to get together (in violation of the Ohio Open Meetings Act) and agree on Wells’ punishment. Council member Arletta Ruton, who has been gunning for Wells for years for daring to question how the fire department treats its patients, got the honor of announcing the punishment. Technically it was a motion, but it’s clear everyone except Wells knew her fate. There were no questions or discussion about Ruton’s ‘proposed’ punishment.

No one including Mayor Clay Carroll, Council President Jeryne Peterson and council members Barry Herron, Robert Masone M.D., Arletta Ruton and Kitty Zwissler raised any questions or objections about the constitutionality of taking away Wells’ freedom of speech and her right to vote as a duly-elected council member. Masone and Zwissler have NEVER even faced voters; both were appointed. Council rules do NOT trump the Constitutions of the United States and the State of Ohio.

Wells asked if she could respond to Ruton’s claims and was allowed to speak. She began reading a letter explaining her concerns about the selective enforcement of council rules. After a couple of sentences, Peterson interrupted her and the railroading was back on track. After a couple of wimpy comments by Herron and Masone, the question was called. It was telling that Wells – who is the only council member that consistently does any homework – questioned being permitted to vote when her name was called. Chief railroading engineer Peterson hadn’t even bothered to closely read the four sentences describing “censure” in the council rules. The second sentence clearly states that the ‘offending member’ can not vote on the motion to censure.

So what did Wells do to warrant such public and humiliating punishment. After all, village officials never punished Fire Chief Pete Leindecker for a multitude of sins, including being sanctioned by the Ohio Division of EMS for falsifying his continuing education hours to renew his EMT card, his year-long dereliction of duty to provide reliable EMS services to residents and visitors, and approving village payment for his son to attend EMT school. We could go on.

So Wells must have really gone over the top this time. Well, not really. Buckeye Lake elected officials have a long history of being extremely thin-skinned. They barely tolerate questions, much less criticism. Most fail to understand the role of an elected official. It’s not to make decisions in private to impose on village residents. For example, Herron regularly whines about problems being brought up in public.

The mayor and council members were elected to represent residents and to address their needs and concerns. They don’t represent council. Village council is just the venue where elected representatives conduct village business in public. Each elected official has a responsibility to listen and respond to residents.

Wells has the crazy idea that council members really should read meeting minutes, contracts and proposed ordinances and resolutions. When she asks a question or points out an error or omission, it’s called disrespecting or harassing village officials or employees. It’s the same if she questions whether residents are getting the services they have paid for and deserve. Really?

The case at hand is about first trying to discuss the selective enforcement of council rules at the July 27 council meeting. Specifically, Peterson decided on her own in July to ignore Rule 43 which gives each council member three minutes at the end of the meeting to make a comment or announcement. Peterson is a petty tyrant when she runs a council meeting and has little tolerance for anyone else speaking, much less asking questions. She decided she shouldn’t have to listen to Wells for even three minutes.

Predictably, Peterson refused to let Wells explain her concerns at the July 27 meeting, forcing Wells to use the only avenue available to air her concern – the still free press. In her written statement to Beacon writer Scott Rawdon, Wells accurately predicated that she would be punished for speaking out. Wells also questioned why the responsibilities of the Public Safety Committee outlined in council rules were changed when she was moved to chair that committee. The committee suddenly no longer had any responsibility for the police and fire departments.

Some organizations focus on getting things done, while others get hung up on procedure and rules, getting little done. Buckeye Lake is in the latter group. The village has received more than $8 million in federal and state grants in the last six or so years. A federal grant covered almost all the cost to install the water distribution system. A nearly $700,000 state grant paid most of the cost to resurface village streets after the water distribution system was installed. Village officials had a fiduciary responsibility to the taxpayers funding those grants to ensure that their taxes were spent properly. They failed miserably, particularly on the street resurfacing project, allowing the project engineers and contractors to ignore contract specifications and do substandard work.

A health department grant fell into the village’s lap this spring. It includes $20,000 for a long-discussed, never built Ohio 79 crosswalk. Like the imaginary community gardens, it likely won’t be done by the Sept. 30 deadline. The contract calls for the funds to be repaid if the projects are not completed.

Contrast this inability to even properly spend grant money with the 20 pages of council rules. The last 11.5 pages address the “Council Code of Conduct” that’s the handiwork of Peterson’s mentor, former Council President Charlene Hayden. She was quick to praise council for punishing Wells Monday night. Hayden infamously said in 2011 that, “Chemcote (resurfacing contractor) did what they were asked to do and then some.” That comment and her support for the village’s engineering consultant seriously handicapped any effort to seek restitution for the deficient designs, work and inspection. Yet Hayden had time to come up with more than 11 pages of rules of conduct for council members including what they do outside public meetings. The additional rules were adopted after Wells had been elected to a new term, but before she took office.

Contrast Buckeye Lake’s 20 pages of rules to NO rules in Hebron or Millersport. Baltimore has 8.5 pages of council rules and addresses only conduct of discussion (one page). Thornville’s rules total 12 pages, spending less than a page on ‘council courtesies,’ right to speak and enforcement/violation of rules. Neither Baltimore nor Thornville have censure provisions or penalties beyond being called to order.

Peterson needs to give her gavel a rest and get to work for residents. She and her fellow council members should apologize to Wells and then make sure we finally get a crosswalk. If they really try maybe we’ll even have a community garden next spring.