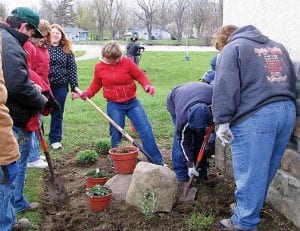 “It’s important for high school students to volunteer,” said Wickerham, whose students have logged 50 hours of volunteer work. The students helped to develop the North Shore’s Crystal Beach in 2006. Wickerham said volunteering helps students gain social skills and involvement in their community. “And, they can watch these trees grow for many, many years,” she said. 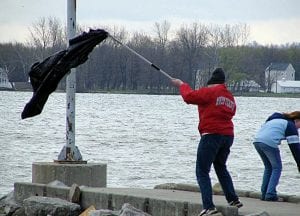 Buckeye Lake State Park Manager Tim Waln said upgrades to the North Shore Boat Ramp are on schedule, except for paving. Recent cold weather has stopped asphalt production, but he hopes paving the boat ramp area will resume once the weather cooperates. “Everything else has been on target,” he said.

The old boat ramps, which Waln said were steeper than most, are replaced with three new ramps at a 15 percent grade, similar to most Ohio state park launch ramps.

A major change, said Waln, is the addition of a left turn lane at the park’s exit. Plenty of patience was often needed to turn left onto SR 79 from the park because of the unusual intersection where neither southbound nor northbound traffic stops. Turning right from the park, however, is much easier and motorists waiting to turn left will no longer block drivers turning right.

Waln said there will be two entrance lanes leading to the new boat ramps from SR 79 with rigging lanes on both sides of the two-lane entrance. Waln said the lines of boaters waiting to launch would move much more quickly with the extra lanes and ramp. 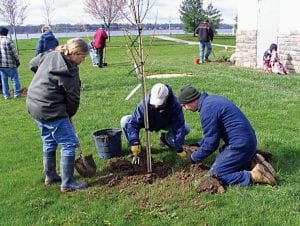 Once the boats are launched, parking will be much easier as well, said Waln. The two existing parking lots that can handle about 60 vehicles with trailers will be expanded to accommodate nearly 100 vehicles with trailers. Fifteen parking spots will be 50 feet for really large vehicles and trailers. Waln said some drivers of large rigs were forced to drive over the parking curb to keep the back of the trailer away from traffic. The parking spots will have more of an angle, too, for easier entry.

Park officials hope the North Shore Boat Ramp will open by Memorial Day weekends, but that depends upon asphalt availability.

According to environmentalgraffiti.com, Senator Gaylord Nelson created Earth Day in the 1960s to draw political attention to environmental issues. Earth Day is now embraced as a global holiday. It’s April 22 in honor of actor Eddie Albert’s birthday. Albert, who starred as Oliver Wendell Douglas on the late 60s and early 70s television show Green Acres, was a wellknown environmental activist. 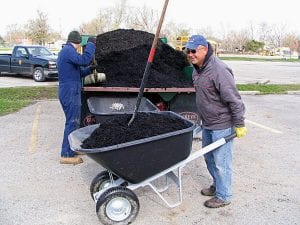 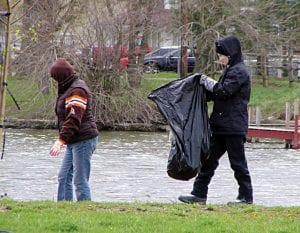