BALTIMORE – Shawn Shook and John Walter joined the Liberty Union Thurston Board of Education Monday night. They finished first and second respectively November 8 in the five-candidate race for two seats. Board President Art Brate retired after 20 years of service and Judith Cosgray, who was appointed last year to replace Joe Farmer when he was appointed to the State Board of Education, failed in her bid for a full term.

Board members unanimously elected Mike Raver as board president for 2012. It’s a familiar post for the 22-year board veteran. John Hutton is the unanimous choice for vice president.

Board meetings will continue to be held at 7 p.m. on the second Monday of each month. The meetings are moving from the high school library to the meeting room in the just opened district administration building behind the elementary school on South Main Street.

The just finished 4,000 square foot building replaces the cramped two-story former residence on Washington Street that was the district’s administrative office for the past 30 years. Board members will discuss deposition of the old brick house at their January 21, workshop meeting. It will likely be sold “as is” at public auction.

The former Liberty Union Middle School was about twothirds destroyed by Tuesday afternoon. The auditorium – on the right in the top photo – will be retained. It was renovated as part of the 2010-11 high school renovation. Beacon photos by Charles Prince.

The new building includes a large meeting space that will also be available to community groups. “We’ve never had a separate meeting space in the district,” Superintendent Paul Mathews said. The room can also be divided in half. The building includes offices for Mathews, Treasurer David Butler, the assistant treasurer, payroll clerk, curriculum coordinator, transportation supervisor and district secretary plus secure storage for district records. “We’ll have what we need for many decades,” Mathews added.

“It’s going full bore now,” he added. The former school, built in the 1950’s for grades 7 – 12, became the middle school when the high school was built. The cleared site will become a parking lot this spring, helping alleviate the current parking crunch during games and other school events. The high school parking lot and the two lots south of Washington Street will also be resurfaced when the new lot is constructed this spring. 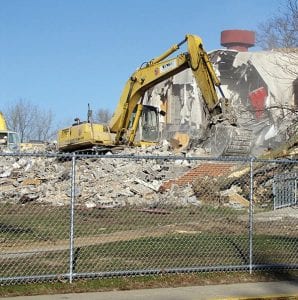 The district’s final construction project – a new maintenance shop and secure bus parking area – is just getting underway. The pad is being completed and the manufactured steel building should be delivered around Feb. 1.

“That will go up very quickly,” Mathews said. The district buses will continue to park in front of the elementary school during the winter. They will move back to the secure lot when it is surfaced this spring.

At the new middle school, the HVAC system has not yet been balanced. One of the four air handling units is inoperable until a replacement arrives late this month.

“We have some hot and cold spots,” Mathews reported. “That will get much better.”

He also reported that the fine particles blocking some hot water filters have been identified as copper particles. The blockages make sinks inoperable so the district rented several portable handwashing facilities last week to make sure students could wash their hands.

During the recognition phase of the meeting, three students were honored as co-students-ofthe month.

Senior Joe Green was unable to attend last month’s meeting. He is the son of Donald and Margaret Green. Green is a student advisor for FFA and is an honor roll student.

Haylie Roth is the daughter of Ben and Tina Roth. The senior is a four-year varsity volleyball player and served as a captain this seaon. She was named second team All-District and first team Mid State League. Roth has played varsity softball for three years. She is an honor roll student.

Shannon Tigner is the daughter of Steve and Melissa Tigner. The sophomore is president of her class and a member of student council. Tigner is an honor roll student with a 4.0 gpa. She was the sophomore homecoming attendant.

The district’s three-member maintenance staff – Supervisor Kenny Kosch, Troy Donahue and Bob Hendershot – were thanked for their flexibility and work ethic, particularly during now almost three years of continuous construction activity. Their “no excuses” attitude was also cited. Each was given a letter of appreciation.

The board has set a special Saturday morning workshop meeting 8:30 a.m. on January 21, in the new district office. The next regular meeting is set for 7 p.m. on Monday, Feb. 13, at the district office.