Severance thanked for service to Millersport 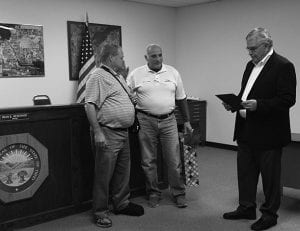 MILLERSPORT – Mayor Dean Severance was thanked for his 18 years service to the village with a gift and reception following Tuesday night’s council meeting. Severance served on council for four years and was mayor for 14 years.

Long-time council member Gary Matheny turned back his bid for a fifth term.

Council members pushed two major decisions into next month. An ordinance to enact a one percent village income tax on earned income was heard for the second reading. There was little discussion about the new tax, until retiring council member David Sherrer asked if its revenue could be used to help support the water department. Fiscal Officer Susan Ramsey said it could, but it would have to move through the village’s General Revenue Fund first. That prompted Sherrer to suggest, “Maybe it makes sense to table this until you decide on the 1 percent.”

There was considerable discussion about the proposed increase in water and sewer rates. Water Superintendent John Wood presented a water rate comparison to show how the proposed increase would affect a family of four using 4,500 gallons a month. Based on Wood’s Internet search, that family would pay $34.06 per month in Millersport, $70 in Thurston, $36.31 in Baltimore, $53.33 in Hebron, $43.69 in Buckeye Lake and $55.18 in Thornville. 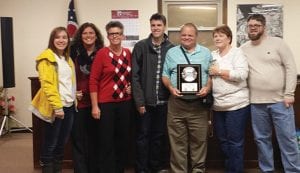 Millersport Mayor Dean Severance, third from right, was joined by his family at a reception following Tuesday night’s council meeting. Severance was thanked for 18 years service to the village – four as a council member and 14 as mayor. He was presented with a commemorative clock. Beacon photo by Peggy Wells.

Wood said the rate increase is needed to fund Ohio EPA-mandated repairs and improvements. The six-year old iron filter must be replaced next year at an estimated cost of $188,000. He acknowledged that it should have lasted longer, but it was not installed properly and the contractor is no longer in business. Both water storage tanks are going to need work as well.

Sherrer pointed out that the proposed water rate increase exceeds both the increase in the Consumer Price Index this year and the Social Security cost of living adjustment.

Mayor-elect Gary Matheny said, “I’m not sure what to think about this right now. I would like to think about it. I want to table it and meet with the Board of Public Affairs and John (Wood). We need a solid set of figures. I need to see some figures. I’m confused like everybody else.”

Severance opened four sealed bids to rent approximately 34 acres of village-owned cropland for farming for three years. The bid gave the village the right to develop or sell all or any portion of the cropland after the first year. The bids were:

In his report, Street Superintendent Gilbert Arnold said Walnut Township used their new DuraPatcher to fix some pot holes on Summit Street. He believes it will last longer than cold mix. repairs. If his prediction bears out, Arnold said the village should consider hiring the township to fix potholes.

He also offered to sell a generator he purchased to the village. It turned out to be too big for his home use and it can not be returned to the seller. He’s giving the village first option on it. It’s a $6,500 item but he paid $4,800.

He acknowledged that the street department can’t afford it right now, but offered to continue making payments on the generator until the village has funds available. Arnold said it could be used to keep the street department furnace running during significant power outages which would keep the hydraulic systems on the trucks warmed up and working better.

Matheny’s resignation from council effective Dec. 31 was accepted. Council members will make an appointment next month to fill the two remaining years of his term.