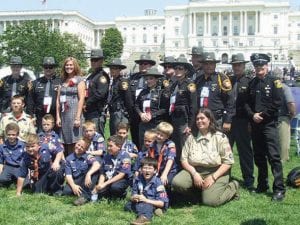 WASHINGTON DC- FairfieldCounty Sheriff’s Deputy Ethan Collins’ name was one of 382 fallen officers dedicated on the walls of the National Law Enforcement Memorial in Washington DC. Collins, 29, was killed Jan. 4 2006 while responding to an officer needs assistance call just outside of Lancaster. His cruiser slid out of control, rolled over, and struck a utility pole.

May 13, officers from all over the nation attended a candlelight vigil at the Washington DC memorial to honor the fallen officers, including Collins. Representing the fallen officer for the vigil were members of the Millersport Cub Scout Pack 227 and Millersport Boy Scout Troop 404, invited to the 19th annual vigil–and the 26th annual National Peace Officers’ Memorial Service–by Collins’ widow, Kiley, for whom the scouts raised money following Ethan Collins’ accident. In turn, the scouts spent nearly a year raising money for their trip to Washington DC.

The weekend of May 11, Millersport parent Mary Ann Hegel escorted the boys to the nation’s capital for truly memorable visit. Although she anticipated a “chaotic four days,” Hegel said the boys surpassed all expectations of proper behavior. “They learned what ‘hurry up and wait’ is all about,” she said. And, “They saw first hand that things don’t always go as planned.” The boys walked for miles to board a subway, then walked some more; they watched the changing of the guard in respectful silence. Hegel said the boys waited for hours for the officers’ ceremony to begin with no Game Boys, portable DVD players, or mp3 players. “They were truly exceptional,” she said. “The boys were able to experience many things they will never see in Millersport,” and not all of it was pretty. Hegel said the boys saw the homeless, protesters, panhandlers, subways and taxies. They tirelessly explored every monument and memorial they could, and toured the Pentagon, the Arlington Cemetery, several museums, and the National Zoo. 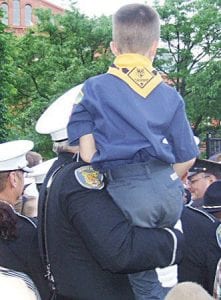 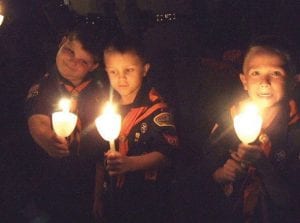 “They met soldiers and learned about the equipment they use to protect us,” she said. The boys watched a fife and drum parade and visited Union Station. They even saw President George Bush as he spoke to the families of the fallen officers. “They saw a group of people pull together in a time of mourning and reaching out to comfort each other in their time of need,” said Hegel.

Hegel saidthat during the ceremony the boys held their candles high with pride as they stood with officers from across the nation. She believes the boys have a new admiration for the officers who risk their lives for others. “I wish you could’ve met the officerwho tore the patch off of his sleeve to give to one of the boys, or see the deputy who took one of the younger scouts on his shoulder so he could see,” she said. The officersare heroes in the boys’ eyes. “The boys carried themselves with pride and showed great respect,” said Hegel. They are awesome kids and we should be proud to know they part of our community.” 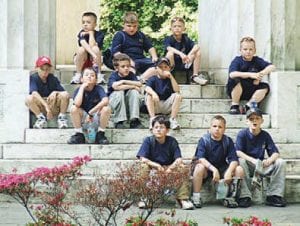 Hegel said the trip wouldn’t have been possible without the community’s help. She’d like to thank everyone who “came out and ate pancakes that you may not have wanted or bought more doughnuts when you still had some left from the week before.”

Hegel thanked everyone who bought candles or sponsored the “Rock-a-Thon,” bowled in the middle of the night or got their cars washed. “Thank you to all the businesses and individuals that gave donations to the boys,” she said, “and thank you (scout leader Megan Brumbaugh), because behind ever group, there’s a great leader.”