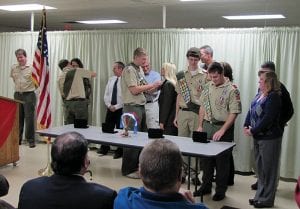 The Eagle Award is the highest recognition for a youth member of the Boy Scouts of America. Only about two percent of all scouts achieve it. Requirements include earning at least 21 merit badges, serving in a position of responsibility for your troop, completing a major service project and passing an Eagle Scout board of review.

The Eagle service project is an i mpor t ant par t of process and it must benefit a non- Scouting organization such as a school, church or local community. Eberts did significant landscaping work at the Thornville Library. Fry upgraded the baseball dugouts at Millersport High School by constructing shelves for helmets and a bat rack. He also made and installed markers on the outfield fence. Jones built racks and carts for the Millersport auditorium sound system, allowing it to be easily moved around. Popo conducted a fundraising campaign to replace the worn and tattered f lags that line downtown Millersport on special occasions. 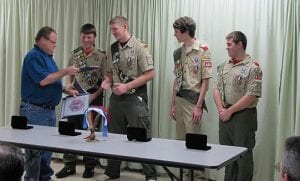 After the scouts received their awards, they presented and attached “parents’ pins” to their parents. The four Eagles selected Vince Popo as their mentor, presenting their mentor pins to him.

State Senator Tim Schaffer delivered a proclamation honoring their achievement from the Ohio Senate, signed by Schaffer and Senate President Thomas E. Niehaus. “Eagle is different,” Schaffer said. He told the four new Eagles that much is expected of them. He presented each of them with a copy of the proclamation. 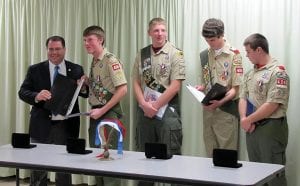 Millersport Mayor Dean Severance presented a packet of congratulatory letters to each Eagle and read his letter honoring their achievement. Rita Emrich and Bob Slater, II, parents of Eagle scouts, read the mother and father poems.

A meal and reception followed the court of honor. The “Buck I Guy” made a surprise appearance leading the new Eagles in a O-H-I-O cheer and congratulating them. OSU’s superfan was a hit, signing autographs and posing for photos with fans. 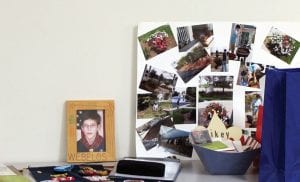 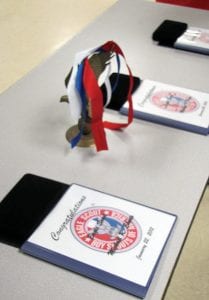 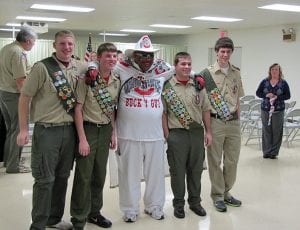 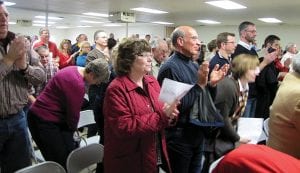