Jazzy band among many at Lancaster Festival 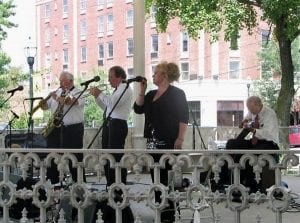 LANCASTER – Great music, food, and weather lured nearly 500 people to the Lancaster bandstand Monday afternoon, where Sax Appeal, a regional quartet, wowed its audience with jazzy hits from the 1920s through the 1970s. The 25th annual Lancaster Festival runs all week and features all types of music from Sax Appeal’s reeds to Lancaster Symphony Orchestra’s strings. According to its web site, the festival is a non-profit organization, managed by members of the community, under the creative leadership of Artistic Director Gary Sheldon. At its core is the Lancaster Festival Orchestra, in performances at the Ohio University-Lancaster campus and venues throughout the city.

“The Lancaster Festival Orchestra has evolved since its inception in 1988, to become one of the finest festival orchestras in the country,” said Sheldon. The ensemble recorded its first CD last summer called “Ragomania.” He said it contains symphony music with a jazzy twist, with music by Grammy winning composers William Bolcom and Clare Fischer, which is based on the music of George Gershwin, Eubie Blake, Billy Strayhorn and Duke Ellington. Sheldon, who is also the founding conductor, conducts the Lancaster Festival Orchestra. Under his leadership, the Lancaster Festival has grown to become an annual celebration of music, art and community. The orchestra’s Saturday night pops concerts at Ohio University in Lancaster through the years have featured some of the bestknown talent in the business, said Sheldon. This summer country star Lee Ann Womack wraps up the festival with a performance on Saturday August 1st. 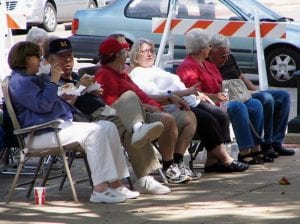 According to the Lancaster Festival’s website, On August 5, 1984, The Columbus Symphony Orchestra, under the baton of Music Director Christian Badea, presented a Picnic and Pops concert at Ohio University-Lancaster. This was the first concert held at OU-L’s outdoor auditorium, which was to become the home stage of The Lancaster Festival Orchestra in 1988. 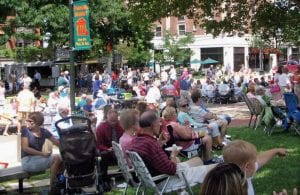 The “Lancaster Festival” was inaugurated in 1985, under the artistic direction of Maestro Badea. Festival Managers Eleanor Hood and Barbara Hunzicker joined artistic Advisor Al Romano. The ’85 Festival had an eightday run and included two CSO symphony concerts, a CSO chamber concert at St. Mary Church, and a week full of community arts and music events. The ’85 Festival concluded with a memorable live battle reenactment on the hills above the OU-L Amphitheatre, accompanied by the CSO performing Beethoven’s “Wellington’s Victory.”

The Festival was extended to 10 days in 1986 as “Lancaster Festival USA,” timed to coincide with the Statue of Liberty’s 100th Birthday celebration. Programming expanded to include ballet, folkloric dance and drama. Performances and special events at locations throughout the city included a mixture of classics, jazz, Broadway, bluegrass, arts and crafts, food, fun, and fireworks. Highlights in 1986 included performances by soloists Michael Murray, Marvis Martin, Vinson Cole, Carter Brey, and Jean-Yves Thibaudet. Ballet Met Columbus performed under artistic director John McFall. To commemorate the appearance of Halley’s comet that year, a huge, ethereal, twinkling comet was installed in the high vaulted ceiling of St. Mary Church. 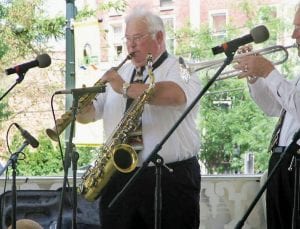 The next year, 1987 events included performances by the CSO and soloists Joseph Swensen and James Tocco. The Zoppe family Circus came to town and UPBEAT, a weeklong musical adventure for children, took place at the Fairfield County District Library. Ballet Met returned, and soloists from Opera Columbus were part of the noontime downtown bandstand series. 1987 also saw the first Festival performance of the Lancaster Chorale.

In November of 1987, the Columbus Symphony left the Lancaster Festival to concentrate on its own Picnic & Pops series. The cameo board hired Sheldon as the Festival’s Music Director. Sheldon auditioned over 300 professional musicians and selected the 65 who became The Lancaster Festival Orchestra. Festival organizers also had to recreate much of the infrastructure that had previously been provided by the CSO, including the orchestra stage and concert shell. The Lancaster Festival Orchestra performed its first concert on Saturday, July 23, 1988. That evening’s concert also included a special narration of John William’s ‘Suite from “Close Encounters of the Third Kind”‘ by Christopher Reeve.

From that whirlwind beginning in 1988, the Lancaster Festival and its Orchestra have continued to grow, becoming the versatile and artistically sound organization that it is today.