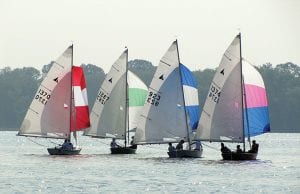 BUCKEYE LAKE – Philip Bunting is a man of action. “I’m here for the excitement,” he said. Bunting found plenty last weekend as a member of North Olmstead residents Bryan and Tiffany Parker’s Interlake sailboat crew during the national Interlake Sailing Class Association Open Championship Regatta at the Buckeye Lake Yacht Club, where 37 sailing boats competed in several races Friday. There was a steady schedule of sailboat races and other events July 27 through 30. It was only Bunting’s second sailing regatta, where he described his role on the Parkers’ crew as “ weight,” to help balance the boat against stiff winds, which blew at roughly 15 miles per hour Friday.

Bryan Parker, who’s sailed for roughly 20 years, really enjoys the competitive aspect of sailboat racing. “You can compete against your friends,” he said, adding that sailing is an extremely physical sport. “Half the battle is pacing yourself to last the day,” said Parker. 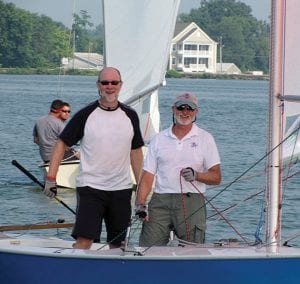 Tiffany Parker joined her husband in races about five or six years ago. She’s learned it can be nearly impossible to pull a racing sailboat back into an upright position if it ever capsizes. “It has more to do with the design of the boat,” she said.

Jamie Jones, a member of Columbus’ Cooper Sailing Club, has sailed for 23 years and said he grew up sailing with his brother nearly every day. Jones is a fan of Buckeye Lake. “I love sailing here,” he said. “When the wind is blowing, it’s as good as it gets.”

It’s said the word “boat” is actually an acronym for “bust out another thousand,” but Rick Savage, a member of the Leatherlips Yacht Club in Shawnee Hills, Ohio, says speedy and nimble Interlake sailboats aren’t as expensive as other types. “ This is an amazingly affordable boat,” he said. Savage said an Interlake sailboat costs roughly $10,000 although they can cost $20,000 or more. “It’s a lot cheaper than windsurfing,” he said, adding that windsurfing is incredibly specialized and requires several sails, boards, and masts for different weather and water conditions. 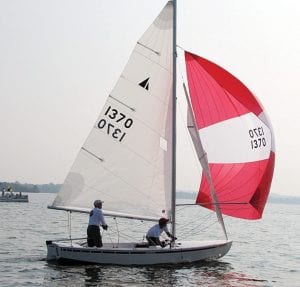 This was the second time the Buckeye Lake Yacht Club hosted the national championship. The first was in 1992. Harris explained that yacht clubs bid to host the championship and competition between the clubs is fierce.

Harris said he officiated a sailboat race in 2006 and became hooked on the sport. “The big challenge is to be ready for all the varied conditions. There’s a broad range of things to deal with,” he said. “It really comes down to skill.” 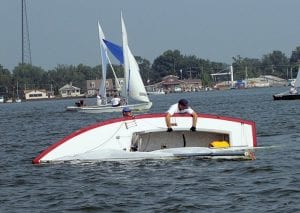 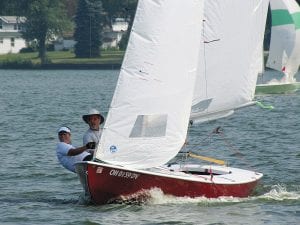 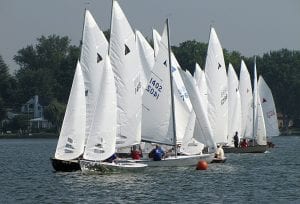 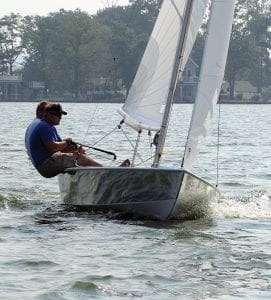 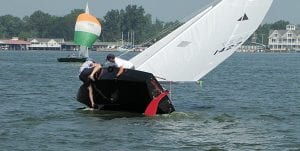