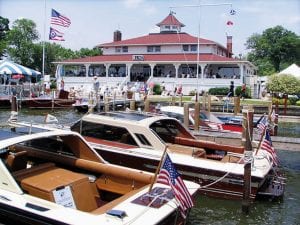 BUCKEYE LAKE – It’s like a surfboard with a motor. Mike Blake, owner of a 1952 DeSilva hydroplane, displayed one of the more unusual boats at this year’s antique and classic boat regatta at the Buckeye Lake Yacht Club last weekend. It’s basically an engine-a 1952 Mercury 10 horsepower-mounted on a small wooden hull, which is piloted while kneeling. Blake said the boat tops out at about 35 miles per hour, and it’s quite a ride. “There’s no neutral. Once it’s on; it’s on,” he said.

In its day, the little boat was basically a waterborne dragster. Off the line, Blake must lean forward over the bow to keep the boat from flipping over backward. When it flattens out, just hang on tight! “It’s a workout,” he said.

The boat hung for 14 years in Blake’s boss’ garage before Blake convinced him to sell it. He bought the appropriate engine for “next to nothing” and set it with Newark resident Jay Miller’s help. Even out of the water, the boat gets plenty of attention. Sure, piloting it is a little dangerous. “It’s fun, though,” said Blake. 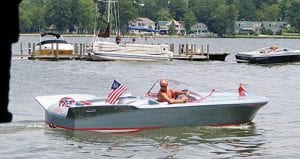 The hydroplane was just one of 32 antique boats exhibited this year, said regatta committee member Dave Levacy. All things considered, he said, last weekend’s show was very successful. The show was historically in August, but there are so many other big events happening in the lake area during August, said Levacy, the committee changed the weekend to June.

Levacy estimates about 500 visitors for the weekendnearly 300 attended Friday night-which is excellent considering the weather forecast was not good. Ironically, antique boat owners don’t want their boats to get wet, at least not on top, he said. Lots of money is invested into antique boats’ interiors, and exposing them to the elements isn’t a good idea.

“A lot of people were skeptical about changing dates,” said Levacy. “We were all very pleased.” He said the event will continue in June and he hopes to build upon this year’s success. 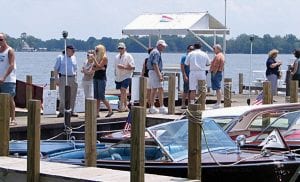 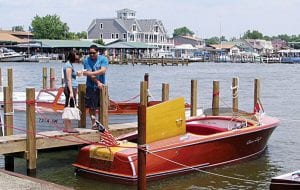 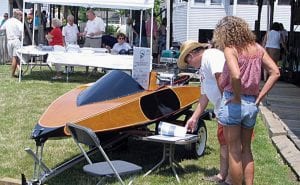