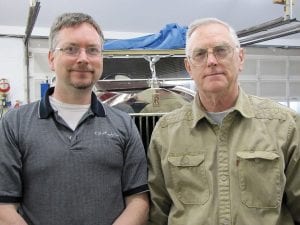 BALTIMORE – Not that there’s anything wrong with Chevys, but Earl “ Butch” Murphy, Jr. is very pleased about the direction his life as a mechanic has taken him. Back in 1970, he was a Chevrolet mechanic who learned of a job opening for a mechanic in a Rolls Royce dealership, which was part of the same franchise as the Chevy dealer where he worked. He got the job. “It’s been Rolls Royce cars ever since,” he said. Murphy and his son, Earl “Butch” Murphy III, recently moved their company, E. F. Murphy, Inc., from Groveport—where it was for 26 years–to Baltimore. They refurbish and maintain Rolls Royce and Bentley automobiles exclusively for customers nationwide. “Rolls Royce and Bentleys were made together,” said Murphy, Jr.

A sprawling maroon 1928 Rolls Royce dominates the Murphys’ shop. Murphy, Jr. explains the vehicle was purchased from a museum and he and his son are making it drivable. “We do a lot of that work,” he said. Murphy Jr. said he and his son do everything from routine maintenance for Rolls Royce owners to completely rebuilding old classic models found in pieces in someone’s barn. “ There are some that need a total restoration,” he said.

“ Rolls Royces are the best cars in the world,” said Murphy Jr. They have a history of being the most reliable vehicle made. He explains that in the early 1900s auto manufacturers would prove their products’ mettle by seeing how far they could be driven before experiencing mechanical failure. Rolls Royce, said Murphy Jr., would consistently win.

Murphy III said it’s impossible for him to name a favorite Rolls Royce or Bentley model after working on so many for so many years. “It’s hard to single one out,” he said. There have been many models through his shop that were extremely limited production, maybe 10, and several have been completely unique.

Murphy III said he’s worked on Rolls Royces with his father since he was 14 years old. He took a break to earn a degree in business administration from Ohio University, but wasted no time rejoining E. F. Murphy, Inc. after graduating. “I still love my job. I look forward to coming to work every day,” Murphy III said.

Rolls Royce vehicles are shrouded in legend. Unfortunately, said Murphy Jr., many are false. It’s true, he said, that Rolls Royces are handmade (individually, as opposed to an assembly line) but it’s not true that they are guaranteed forever or that all Rolls Royce hoods are welded shut. It’s fact that Rolls Royce models were modernized following World War II. Murphy Jr. said that ahead of WWII, Rolls Royce only built a running chassis, and each Rolls Royce owner would hire another company to create the body. There were more changes with the beginning of the 21st Century. He said BMW purchased Rolls Royce around 2000 and Volkswagen purchased Bentley. “Bringing out a new model is very expensive and they couldn’t afford to do it,” said Murphy Jr. For example, American standards require crash tests for all vehicles and Rolls Royce wasn’t willing to destroy several carefully crafted handmade cars for the sake of proving their quality. Generally, he said he and his son service Rolls Royces and Bentleys dated from the 1920s to 2000. The Murphys can only work on a three or four at a time so they’re backordered for months.

With that in mind, Murphy Jr. said he only advertises in Rolls Royce publications and his shop has no sign. “We keep it low profile, but it’s getting harder and harder to do,” he said. For security’s sake, the Murphys aren’t in the habit of divulging their shop’s location. It’s not that they want to keep it secret, merely low-keyed for their exclusive clientele.

Father and son loved the idea of moving their facility to a small community and they approached the village when they learned there was a space available.

“The Village of Baltimore seems to be very business friendly,” said Murphy Jr.

Village Administrator Marsha Hall agrees. She said The Baltimore Area Community Improvement Corporation, a non- profit community organization, helped the Murphys with a financial grant to assist them in the purchase of the building. “The village did not provide financial assistance, but worked with them through the zoning and building approval process to make sure their move here was as easy as possible,” said Hall.

As exclusive as Rolls Royce vehicles seem, Murphy III said there are more Rolls Royce owners around than people may think, even locally. “They’re just usually stored away,” he said. Rolls Royce vehicles are maintenance intensive and their owners rarely drive them as primary transportation. Murphy Jr. is no exception. His single Rolls Royce usually only comes out for parades very special occasions. Otherwise, “I drive a GMC pick-up,” he said.