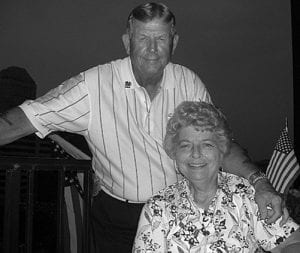 Bob’s wife of nearly 64 years, Marjorie Lou Dunnington (nee Cave), followed him in death two days later. The Dunningtons previously lived in Harbor Hills on Buckeye Lake, in Hebron, and Lexington Country Club in Fort Myers, Florida. Prior to that, they resided in Gahanna, where they raised their three boys. Bob, a proud Navy Veteran of the Korean Conflict, was a lifelong member of East Gate Masonic Lodge, Aladdin Shrine Temple (where he was in both The Jesters and Hospitality Units), and the Caledonia Chapter of Eastern Star. He was a member of Mifflin Presbyterian Church, and later, Central College Presbyterian Church. Robert was a passionate golfer, a self-taught technology buff, and a spirited water sports enthusiast. He travelled the world with his wife, pursuing both of these passions.

Bob will be remembered for his robust laugh, his kindness, his patriotism, his uncanny mechanical ingenuity, his fierce devotion to his family, and most of all, his everlasting love for his wife, Marjorie.