Rizzo: ‘You have no imminent threat to dam safety here. None!’ 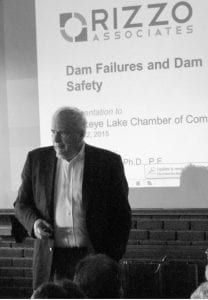 President/CEO Dr. Paul C. Rizzo, P.E. began his presentation with a world-wide review of dam failures. Overtopping – water runs over the top of the dam – is the most common cause (90 percent plus) of failure, he said. Piping – where a stream of water works its way through the embankment – comes in second. Foundation degradation where water undermines the foundation and earthquakes are also responsible for failures, Rizzo said.

Most dam failures – 80 – 85 percent – occur in the first five years after construction. There are many 100 year-old plus dams, he added. Portions of the Buckeye Lake Dam are 180+ years old.

• Structures on the crest;

• Large trees and animal burrows on the embankment; and

• Depressions on the crest.

He said spillway capacity is the key issue as it directly affects overtopping. “We could not see evidence of piping at Buckeye Lake,” Rizzo said.

The capacity issue is driven by the Probable Maximum Flood (PMF). PMF frequency falls somewhere between once every 10,000 to 50,000 years, he explained. That time period goes back to the last glacier, Rizzo said.

“ODNR is concerned we don’t have enough capacity to accomdate a PMF,” Rizzo said. That’s was the same concern in the 1990’s.

Freeboard – the space between the normal water level and the top of the dam – is not adequate, he explained. The Army Corps of Engineers solution is to lower the lake level. The alternative is to increase spillway capacity. “It is common sense,” Rizzo said. “I can skin the cat two ways.”

Rizzo said the downstream channel from the spillway needs fixed to minimize flooding from the additional water released by a lower spillway. “That channel downstream has to be cleaned out. You’ve got to route the flood all the way through.” That means channel improvements like cleaning beyond ODNR’s recent widening project that stops just north of I-70.

Cutting off 18 inches at Seller’s Point and raising the lake level to 890.75 means, “You’re back in business for boating.”

Ryan asked whether downstream residents have to live in fear of a failure. “No sir,” Rizzo strongly replied.

In a post-presentation conference with State Representatives Bill Hayes and Tim Schaffer and reporters, Rizzo said, “You’ve got to accommodate their (ODNR’s) regulations. We’re improving on it here.”

He added that they have recommended that ODNR keep material on site to address piping.

“You have no imminent threat to dam safety here,” Rizzo emphasized. “None!”

Rizzo said another spillway may be needed to meet 100 percent PMF. He doesn’t favor increasing the size of the gated spillway in Buckeye Lake Village. He believes lowering the Seller’s Point spillway could be done by Labor Day. If the Chamber could have the work done it would take a couple weeks.

“By increasing the water level, you can use barges to work on the upstream (side of the dam)” Rizzo said. “I can’t imagine remediating it from the downstream side.”

Rizzo is still recommending fixing the existing dam as proposed in 1997. Some segments need to be replaced. “To build a new dam, you’ve got to drain the lake,”