Rizzo: ‘It is not a case of imminent failure!’ 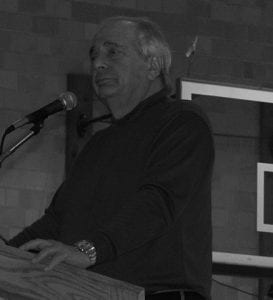 MILLERSPORT – It may be time to “make some noise” to encourage ODNR to be more forthcoming about its plans for rebuild ing Buckeye Lake dam. Roughly 150 people attended A Better Dam Plan community meeting Monday evening at Millersport Elementary School with technical consultant Dr. Paul Rizzo of Rizzo and Associates.

Attendees were encouraged to sign a petition urging ODNR to be far more transparent in its plans for the lake and to stop working in an information vacuum. The lake’s water level continues to drift lower due to evaporation. It is now nearly eight inches below ODNR’s so called ‘winter pool.’ The 2015 recreational season has been lost, putting many lake area businesses in jeopardy.

“We don’t know of a timeline of getting water back in this lake,” said Buckeye Lake Region Chamber of Commerce secretary and Boat Boys’ owner Tim Figgins, who moderated the meeting. “If there’s one thing we know it’s that we can’t trust what we’ve heard so far,” he said.

“My business is dams and dam safety,” Rizzo said. He said in 1997 ODNR hired his Pittsburgh based engineering firm to evaluate the state of the Buckeye lake dam. He said he and his associates spent a long time on the report, which the state subsequently ignored.

Rizzo said his report found deficiencies with the dam. “Your dam is not perfect,” he said. But, “It is not a case of imminent failure.” Rizzo said he doesn’t have a personal agenda for the dam. He said the dam definitely needs work; however, “The work can be done without the degree of impact you are seeing.”

Rizzo said several factors cause dam failure. The first is “overtopping,” when water flows over the top of the dam, causing abrupt failure. “Piping” is when a small leak works its way through the dam, and then expands over time. Tree roots can cause piping, as well as burrowing animals. He doesn’t believe Buckeye Lake has any geology problems, such as earthquakes or seismic activity. Rizzo said overtopping could be an issue with Buckeye Lake.

Rizzo said much of the Buckeye Lake dam’s safety issues due to a “probable maximum flood (PMF),” or the absolute most rainfall that could happen in a short period and the dam’s ability to contain that amount. He said dams today are required to contain 100 percent of a PMF. But, in the past, some dams were allowed to contain just a fraction of the PMF. Currently, the lake can handle roughly 55 percent of a PMF.

Rizzo was clear that the capacity of the Seller’s Point spillway is currently not adequate to handle 100 percent PMF. He suggests significantly increasing Seller’s Point’s water capacity or building another spillway. He said his firm has not been given access to the state’s plans for repairing the dam.

“The impact on the lake is some of the worst I’ve ever seen,” Rizzo said. “It could’ve been done with a lot less impact with some planning ahead of time.”

Rizzo fielded questions from the audience.

Q: Would a new spillway have taken care of the situation?

Rizzo: “The real problem is spillway capacity, not seepage.”

Rizzo: There is some evidence of seepage but there is no imminent failure because of piping. He was surprised that ODNR cut down trees around the dam, but left the stumps. “That’s the worst thing you can do,” he said. The stumps must be removed because it’s the roots causing the seepage. Once they rot away, they will leave holes.

Rizzo said trees are never good for any dam at any time. No large dams have trees on them. “Trees on dams are problems; that’s a fact,” he said. “You won’t see trees on dams.”

Q: What permits does ODNR need to repair the dam?

Rizzo: ODNR normally needs a 401 water quality certification from Ohio EPA and a 404 permit from the Army Corps of Engineers. He said ODNR was able to circumvent the 404 permit requirement by claiming the dam’s condition was an emergency situation. Rizzo reiterated the spillway must be addressed to solve the problem.

Q: Have you ever seen this happen before? Can we learn from experience?

Rizzo: “Your situation is unique in the world,” he said. There may be no other situations where private residents own one side of the dam and the government owns the other.

Q: Can we ever put our docks back?

Q: What is a safe level of water in the lake right now?

Rizzo: “There’s no difference between 1997 and this year,” he said. The current spillway still won’t get the lake past 55 percent PMF.

Figgins encouraged everyone to sign the petition. “This is a starting point,” he said. “A lot of what is happening does not make sense.” Traveling to the statehouse in person may be a good method to grab ODNR’s attention and force them to be more forthcoming with information. “We’re not being treated as people who should be at the table,” Figgins said.

• What is ODNR’s plan/vision for Buckeye Lake over the next 5-10 years? Timeline?

• Provide detailed plans of the design of the new dam. How will the design overall impact the local business and residents?

• Why hasn’t ODNR considered other designs that would allow water levels to be increased which would have an immediate positive impact on local businesses and residents?

• Upon completion of the dam, will ODNR allow residents to install docks in front of their residences? If yes, what design will be allowed?

• Is it ODNR’s intent to remove all the trees from the dam? If trees are removed, will ODNR remove the stumps as well?

• Does ODNR have repair/ replacement construction plans for other areas of the lake, not included on the 4.1-mile dam?

• Will ODNR agree to be more transparent in their plans for Buckeye Lake and reduce the amount of aggression demonstrated to businesses and residents to date?

We request of ODNR that residents from Fairfield, Licking and Perry counties (all counties affected by the dam repair) be appointed to the existing advisory board council to insure equal representation and that our voices be heard.