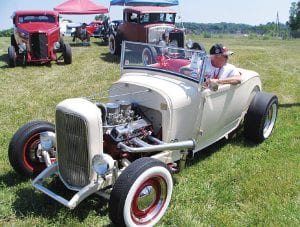 HEBRON- Roaring engines were the siren’s song for thousands of classic racing car enthusiasts who flocked to National Trail Raceway from across the nation last weekend for the Holley NHRA Hot Rod Reunion. Proud owners of gleaming chrome roadsters and dragsters filled the venue to show off their classic racing and street rods beneath clear blue skies.

“We had a great time,” said Mike Fornataro, National Trail Raceway’s sales and marketing manager. He spent most of the weekend milling amongst the crowd, which Fornataro said had overwhelmingly positive comments about the hot rod reunion. This was the first time National Trail Raceway hosted the event. Fornataro credited the perfect weather, friendly staff, and spacious facility with much of the event’s success, but he also believes the event was popular because all its proceeds go to the NHRA Motorsports Museum in California. 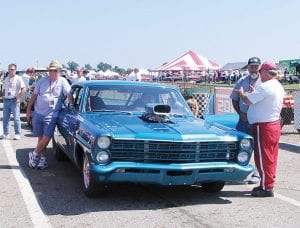 “People genuinely want this event to be successful,” he said. “It’s the real deal.” Unlike other events, said Fornataro, most of the crowd actually participated in the event, by displaying their vehicles, racing them, or both.

He’s working on the numbers, but Fornataro doesn’t believe the Hot Rod Reunion had the draw of the Pontiac Excitement Nationals, a huge event that racetrack lost to Norwalk Raceway Park. However, he said the impact on the local economy may have been equal since the participants came to Hebron from all over the United States, filling local hotels to capacity and keeping the restaurants hopping.

Jim Layton, National Trail’s general manager, said the
Hot Rod Reunion was a success, especially the Saturday night “Cacklefest,” and
will return for Father’s Day weekend, 2008. “For us, it’s a good event,” he
said. Other events coming up this summer at National Trail Raceway include the
AMA Prostar motorcycle event and the 20th Annual Night of Thunder in July, and
August’s 28th Annual Mopar Nationals. 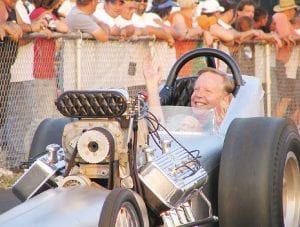 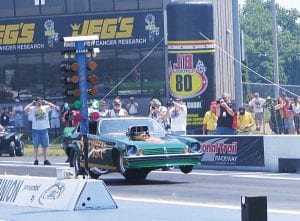