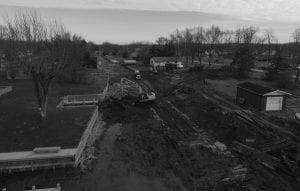 THORNVILLE – Perry County Commissioner Jim O’Brien said he and the other commissioners are working hard to find some sort of funding to help finance a large canal cleaning project near Honey Creek Road, but so far it’s been difficult. “We’re just trying to see which avenues we can take, if any,” he said. A 40-year-old lawsuit stands in their way.

Residents along two canals north of Honey Creek Road, near the Copper Penny tavern, are pooling their resources to clean out the canals while water levels are down as the State of Ohio replaces Buckeye Lake’s 4.1-mile earthen dam. The project is called the Buckeye Lake Holiday Harbors Canal East Channel Project. 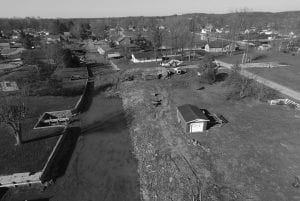 O’Brien said Perry County received a $300,000 grant from the state, but its uses were already designated. “That doesn’t mean this is over,” he said. “We’re just trying to do everything we can.”

“The state is not going to help us,” said Jeff Zemolong, who lives near Honey Creek Road at the end of a canal. He said since the Buckeye Lake Holiday Harbors Canal East Channel Project is private, its total price tag remains undisclosed, but it isn’t cheap. Zemolong really appreciated help from Dickey Langston of the Rockford Corporation who helped the canal project members acquire some of the large mats to line the canals, which are otherwise very expensive. “We were dead in the water,” Zemolong said. He said local farmers volunteered to accept the dredge material on their properties.

“All the property owners are doing it on their own to improve the canals,” Zemolong said. He said even though ODNR designates the canals as private, they can be publicly accessed from Buckeye Lake and often are. Zemolong said rhetorically, “We should put up a gate in the canal and see how upset people get.” He figured the ODNR would be the first to tell him to remove the gate, even though government funding is being denied.

Zemolong said the project is in its second year. Despite the lack of public funding, he said he’s pleased the project began moving forward. “What’s the sense of being on the lake if you can’t use the canal,” Zemolong said.

Thorn Township Trustee Robert Coleman, who, as a homeowner, is participating in the project, said the canals are private based on a lawsuit from 1975, whereby the residents of the time requested the canals to be privately owned. “The judge ruled for the people,” Coleman said. “From that point on, they remain private channels.”

Coleman said once the water levels stayed at low pool, beginning March 2015, he said ODNR representatives told him this would be the only time in residents’ lifetimes they could clean out the canals easily. Coleman said those who live along the canal were contacted, contracts were approved, and work began. If the weather cooperates, Coleman said the project may be complete by the end of May.

As a result of the 1975 lawsuit, Coleman said it’s unlikely the project would ever receive state funding. “We’re not getting help from anybody,” he said.

Coleman said the canals were created in the 1930s or 1940s and have never been cleaned. They were sorely in need. “We’re trying to make everyone’s property values better,” he said.

A request for comment to ODNR was not returned by press time.