NEWARK – A quiet effort to require both residential and commercial contractors to register with the Licking County Building Code Department is dead for at least the near-term.

The tentative agenda released Monday for the county commissioners’ regular Tuesday morning meeting included “97-170 Adopt Licking County Contractor Registration Policy.” The one and half page policy requires residential and commercial general, electrical, HVAC, refrigeration, fire protection, and hydronics contractors “to register with Licking County prior to starting any work within the unincorporated areas of Licking County.” Plumbing contractors must be registered with the Licking County Health Department. The registration fee is $100 per year for each type of contractor. Contractors must also carry and provide proof of at least $500,000 general liability insurance, Workers Compensation and Ohio Construction Industry licenses if doing commercial work. All subcontractors doing the work of the listed contractor types also must be registered, even if working for a registered general contractor.

Homeowners would have a very limited right to do their own work on their own property without registration if they sign an affidavit in front of a notary. That affidavit includes five stipulations including that work could only be done on a “home for myself and my family,” all permits and inspections must be obtained, and an acknowledgment that “there is a fine or imprisonment for violating the resolutions of Licking County.”

Commission President Duane Flowers publicized the effort when he read a nearly four page statement at the November 20 commissioners meeting and then posted it on Facebook. He wrote, “Forcing an individual, a private citizen, to get a government exemption and forcing them to sign a document that states failure to conform can be grounds for imprisonment and a monetary fine is a violation of due process and hinders free enterprise as I understand it.” He added that when he attended the first meeting several months ago, “the conversation was, in no way residential properties would be included.”

His posting and a Beacon story last week unleashed a torrent of emails and comments on social media. Though it was clear by Monday that residents were upset with the proposal, commissioners were unprepared for the large turnout Tuesday morning. Their meeting was moved from a fourth floor conference room to the largest meeting room in the building. It was still too small with more people standing than sitting.

The next two hours demonstrated what a difference a day and more than 150 upset Licking County residents can make. On Monday in an Advocate story, Licking County Commissioner Tim Bubb said, “The industry has made a case to me. They’ve convinced me it’s the right thing to do. It’s simply our way of getting some accountability. All we want to do is see if they have a state license.” Bubb continued to The Advocate, “It’s not additional regulation. It’s just a contractor registration. It’s like a Better Business Bureau list. What’s the harm if the public has a better degree of information?”

Bubb briefly tried to keep the story line alive Tuesday morning. He thanked everyone for coming to the meeting, adding that registration had been discussed since 2010, but had never got done. Bubb said discussions had resumed in March. Then ignoring that the meeting agenda, released less than 24 hours earlier, had listed “Adopt Licking County Contractor Registration Policy,” Bubb said, “It certainly is not perfect…It is not a final proposal…There is no rush to judgment.” He added that commissioners are “willing to listen.”

Bubb then moved to table the resolution “indefinitely,” with Commissioner Rick Black quickly seconding it. “We’ll have to fall back,” Black said. “I think before we do anything there would be a public hearing,” Bubb added.

Flowers questioned whether tabling the resolution was proper. “I would prefer to bring it up to defeat,” he explained. Bubb quickly withdrew his motion to table. The resolution was defeated unanimously

After the resolution was rejected, Flowers welcomed public comments. He turned first to Brian Lewis who Flowers said had been requesting an opportunity to comment for several days. “I will hire whoever I want to hire to work on my property,” Lewis declared. He added that Licking County residents don’t want this type of governmental overreach. “Please don’t bring it back,” he concluded.

Flowers then turned to the elected officials present. Licking County has 75 township trustees – 25 townships with three trustees each. At least a third of the trustees were present. The registration requirement would immediately apply to all 25 townships in the county. It’s applicability in villages and cities that contract with the Licking County Building Code Department would depend on the individual contract terms.

Harrison Township Trustee, past President of the Licking County Township Association and former County Commissioner Mark Van Buren spoke first. He asked why the proposal was not shared with trustees, noting that a county-wide trustees meeting in October would have been good opportunity to discuss it. “Let’s not overreach,” he concluded.

Etna Township Trustee and Ohio Township Association Director John Carlisle said he has owned and managed a mechanical contracting business for more than 30 years. Carlisle said he holds several state contractor licenses. He noted that the state law setting up the requirements for state licenses for contractors doing commercial work specifically prohibits county and local regulations regarding contractors. “This is an overreach,” he said.

Licking Township Trustee Joe Hart said, “It (the proposed registration requirement) has never been mentioned to me.”

Black attempted to defend the requirement, saying, “(It) gives every contractor an opportunity to advertise.” New residents could simply review a list of registered contractors on a list at the Licking County Building Code Department. Several residents suggested that Facebook already provides that opportunity, adding “it’s free.”

A Newark Township Trustee said, “We don’t need to be saved from ourselves.” He also added, “You should be ashamed about how this was done.”

McKean Township Trustee Dannette McInturff said she also owns an excavating company. Speaking as a trustee and resident, she said, “They completely ignored the governing bodies of the people affected…We’re going to hold everyone accountable.”

Municipal Court Clerk and former long-time County Commissioner Marcia Phelps suggested attendees ask for a commitment from the Commissioners for advance notification if this is going to be brought up again.

Harrison Township Trustee Eric Smith urged Commissioners to be “transparent” on this issue.

Buckeye Lake Village Mayor Peggy Wells said the proposal would reduce competition and make it more difficult for individuals to start a contracting business. She said more contractors are needed, not less.

Eric Landis, owner of LICO Construction, was the only contractor involved in the quiet discussions that identified himself. He said he attended three or four meetings. “I had dual opinions…A license doesn’t guarantee good work…I’m not for it or against it.”

Negative comments continued for more than hour, coming from small contractors and homeowners. Several residents said it would harm charitable activities like Habitat for Humanity and the individual efforts of churches to upgrade homes for the elderly and needy. One father said his sons are expected to do contractor-type work for their grandmother who insists on paying them. That would be an illegal activity under the resolution.

As comments were winding down, Bubb admitted, “It was obviously flawed.” Commissioners asked attendees to sign in with an email, pledging advance notice if discussions resume. 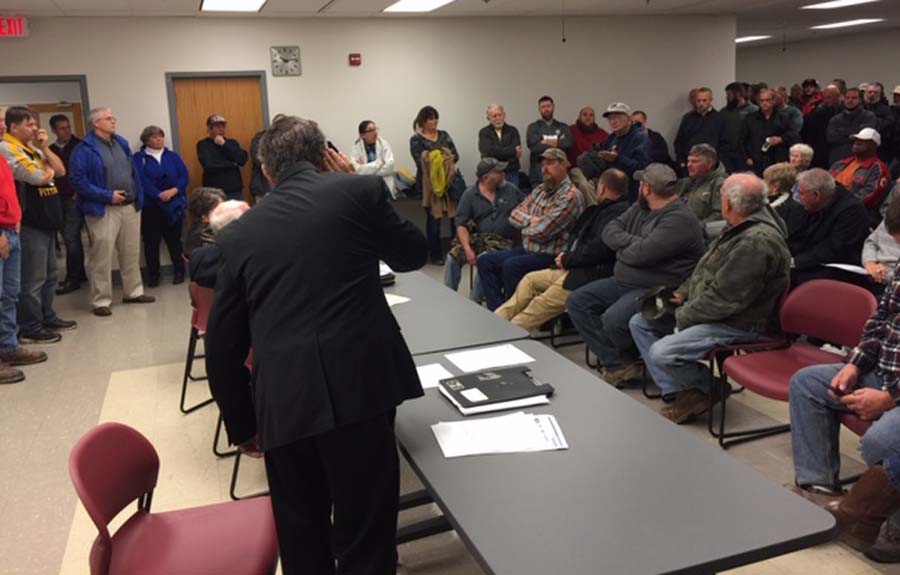