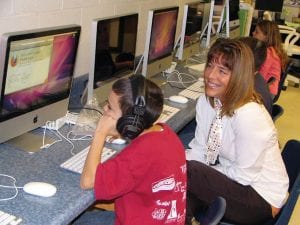 MILLERSPORT – Angie Harrison is back, and the community is happy about it.

“She’s not technically a hometown girl, but that’s how she sees it,” said Millersport Superintendent Ron Thornton. “For her, it’s her hometown, and people just respect her so much.”

Harrison spent the past three years as principal of grades 3, 4 and 5 at Amanda-Clearcreek in southern Fairfield County. Though she said her building was “doing great things,” financial problems in the district had Harrison questioning the future there.

“I’m one of those people who believes everything happens for a reason,” she said. “When this opened up, it was like it was meant to be …. This school is such a gem. It’s small, it’s the heart of this community. I see it more now after being gone and coming back. I know the students names. I know the parents names. I love it here!”

It shows. Harrison walks down the hallway and has young students running up to show off boo-boo’s, tell her stories or just give a hug.

“I measure the success of any day by how many hugs I get,” Harrison says with a smile. “I think I got 14 already this morning. So, what better job is there?”

Harrison took over at the start of this school year for Cheryl Thomson, who retired. Thornton said Thomson did great things for the elementary school in her time there. “Angie was the perfect person to come back and take those reins and move it even further forward …. When she left Millersport four years ago she was very popular. She honed her skills as an administrator in Amanda and came back even better than when she left. People love her administrative style, her focus on the kids and the charm she brings to her job.”

Parent Dina Reasoner agreed the community is very positive about having a name and face they already trust heading up the kindergarten through sixth grade building. “She was a good fit here before, and I think she’s a good fit again because she has the kids’ best interest in mind with everything she does,” Reasoner said. “She’s pro-active. Status quo isn’t good enough for her. She pursues excellence in everything she does. That’s just who she is.”

Harrison said she has no big plans for changes at the school. “I just want to continue the good things going on here,” she said. “Behavior is phenomenal. The teachers work so hard and do anything that’s asked of them. I just want to keep test scores up and make this a happy place for kids to be and learn.”

Harrison’s son, Alec, is a fifth grader at Millersport. She also has a daughter, Lauren, in college who is also studying to be an educator.

“I’m so proud of The School of Promise Award,” Harrison said. “It’s the result of strong leadership in recent years and the teachers’ hard work. I’m happy to see them being recognized for that.”