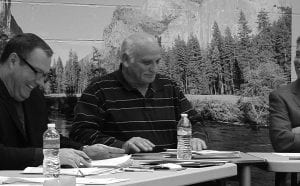 Vince Popo, center, will start his third term as president of the Walnut Township Local Schools Board of Education. He is flanked by new District Treasurer Jeff Beane. Beacon photo by Charles Prince.

MILLERSPORT – Retired teacher and coach Vince Popo was unanimously elected as president of the Walnut Township Local Schools Board of Education Monday night.

Popo is starting his third term on the board. Board President Tom Cumbow nominated Popo for the post. Cumbow was unanimously elected to be vice president.

Popo thanked Cumbow for his service during a particularly difficult 2015. “You did a real good job weathering the storm,” he said.

Board liaison assignments were also made during the annual reorganizational meeting. They are:

• Buildings and Grounds; Transportation Programs; and Maintenance: Cumbow (continues as chair) and Popo;

• Instructional and Curricular Programs: Keller (chair) and Popo; and

The board will continue to hold its regular monthly meeting at 7 p.m. on the second Monday of each month. The meetings have moved from the elementary school library to the Lake Learning Center in the high school. The September board meeting will be held at the Fairfield Beach Property Owners Association clubhouse or at the Millersport Fire Department’s Fairfield Beach Fire Station. January’s regular meeting followed the reorganizational meeting. The board also held a short hearing on its 18-month budget beginning July 1, 2016, through December 31, 2017, before the reorganizational meeting.

During the regular meeting, South Bank resident Bob Myers urged board members to cooperate closely with the Village of Millersport and Walnut Township Trustees. He said the district’s recreational facilities should be open more to the public, suggesting open gym hours, an in-door walking track and an outdoors walking track.

“We’ve got to identify our niche and go after it,” Myers said. “We have a beautiful facility that is underused. Why is this place locked up so much?”

“Those things are going to be addressed,” Popo told Myers. “It’s going to change, Bob.”

“People have to feel welcome and familiar with this facility,” Myers added.

This was the first year that the Millersport Firefighters Association directly collaborated with White Christmas. The proceeds from the Association’s 14th Annual Toy Drive were distributed by the White Christmas program.

Stought said the collaboration will grow for 2016 allowing White Christmas to help any family in the school district rather than just families with a student in the district. “It will be a much bigger project,” he said.

In his report, Cotner thanked board members for their service and welcomed Holly Armstrong to the board. He also emphasized that the 1.7 mill emergency levy that board members narrowly placed on the March 15 ballot is a RENEWAL. It will NOT raise taxes!

In 2014, board members decided to combine the 1.8 mill levy renewal with a request for seven additional mills. Voters turned down that combined levy, reducing district revenues and district property taxes by $258,000 a year. Cotner said property tax bills in 2015 should have dropped accordingly. Last August, voters approved a seven mill additional levy for a net revenue increase of 5.2 mills after factoring in the loss the 1.8 mill emergency levy.

Cotner said the district can’t afford to lose its last remaining emergency levy. Voters are being asked to renew it at no increase in taxes for another five years. In response to a question from Bob Myers, Cotner said the elementary library will be restaffed if voters approve the renewal.