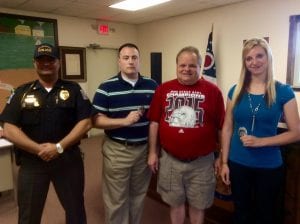 MILLERSPORT – Thanks to some $13,000 in up-front money, the Millersport Pool will reopen for another season.

It appeared last fall that the plug had been pulled for the last time on the 40+ year-old pool. A combination of continuing operating deficits and increasing pressure on the village’s finances was the culprit. In recent years, the pool has been losing $15,000 to $16,000 annually. A better season combined with more fundraising including taking over the fried baloney sandwich booth at the Sweet Corn Festival cut last year’s deficit to just over $7,000.

Mayor’s Assistant Vince Popo who also oversees the pool said the Ohio District of the United Pentecostal Church which bases all its summer camps at the Apostolic Campground in Millersport advanced $10,000. Campers use the pool in the morning during the camp season. The growing adult volleyball league at the pool came up with $2,500 while the Millersport Lions Club donated $500 for pool paint.

But the pool faced another obstacle as Board of Public Affairs President Doug Carpenter urged council members in a letter not to open the pool. He objects to the quantity of free water used by the pool.

“I don’t buy that,” Mayor Dean Severence quickly responded. He the marginal cost to provide water to the pool is minimal, adding that the loss of the pool this year would be particular devastating to young people given the school district’s financial problems and the loss the recreational season on Buckeye Lake. Severence said he would talk about it with Carpenter.

“I think we can open June 1,” Popo told council members. The season would run through Sunday, August 9. School is starting earlier this year; students report on Wednesday August 12.

Council members unanimously approved the rates and hours of operation Tuesday night. The rates are the same as last year except there is no early purchase discount for season passes. Family memberships are $200 for upto six people. Additional persons can be added for $20 each. Senior citizen seasonal memberships are $60 if purchased with a Golden Buckeye Card. Adult (age 15 and older) single seasonal memberships are $80. Daily rates are: $2 for a senior citizen, $4 for adults 15+ years old and $3 for children 3 to 14. Ages 2 and under are free.

Resident Eric Scher, who attends council meetings regularly, donated $1,500 in February to cover the cost of the health department licenses for the pool and concession stand.

After the pool closes on August 9, Popo said pool supporters have until December 31 to cover any deficit. If that doesn’t happen, then the pool should be done .

In other business Tuesday night, Fire Chief Bob Price told council members that ODNR is providing an inboard jet boat to replace the village’s grounded fire boat. It has room for the portable pump which has been installed. “It’s good for a boat fire,” he said. “It’s a step in the right direction.”

Price told council members they might get complaints about the boat’s operation. It only needs about six inches of water if it is planing, but can bog down in the mud at slower speeds. Consequently, it will be operated at top speed most of the time to keep it planing and out of the mud. Since the boat still belongs to the Division of Watercraft, firefighters must be certified to operate it. So far a dozen have been certified and Watercraft officers are continuing to train firefighters for a few hours on Mondays and Fridays.

Price said he is still seeking financial help from ODNR to purchase a boat for the department that can be equipped as a fire boat, capable of battling both boat and structure fires.

Council members also unanimously created the position of wastewater intern. The program is designed to help students in two or four year environmental science program get the experience hours required by Ohio EPA for operating licenses while filling the village’s need for a part-time maintenance worker/laborer. The position pays $10 per hour and is limited to 20 hours per week.

Council members also unanimously created the position of water meter reader/customer service representative. William Ray Goodwin will fill the position on a full-time basis at $11/ hour. Most of the duties were handled by Tom Boso who retired in January.