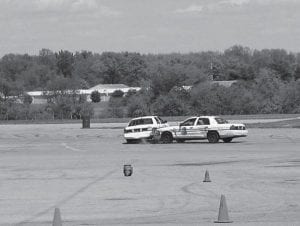 Columbus Police officers spent weeks this spring at National Trail Raceway in PIT (performance instruction and training) sessions. Lt. Mark Gardner said the raceway is one of the few places in the Columbus area with enough open pavement for officers to learn to use their cruisers to spin a fleeing vehicle, learn the proper way to throw “stop sticks,” which puncture tires, and learn to control skids. Gardner said spinning a vehicle will shut down its engine. By the time the fleeing vehicle’s driver figures out what happened and restarts the vehicle, police are ready to make an arrest. The spin training is very effective, but it took a heavy toll on the surplus cruisers used for the training sessions. Beacon Photo by Scott Rawdon.

• June 25: A Millersport man told police a person was trespassing on his Buckeye Lake property.

• June 26: Police secured an open door at a vacant house.

• June 26: Police responded to a report of an active domestic dispute at a West 1st Street residence. It was only a verbal dispute.

• June 27: A West 1st Street woman said someone broke a verbal contract with her. She was advised it was a civil matter.

• June 28: A manager at Wendy’s said he was receiving threatening phone calls.

• June 28: A North Bank Road resident said three or four men were trespassing on the property.

Hebron • May 13: Police responded to an alarm drop at the Dollar General store in Buckeye Lake. A manager said she entered the wrong alarm code.

• May 13: Police searched for a white van and its occupants who were trying to sell meat door-todoor. Police didn’t find the van.

• May 13: Police checked out a report of a van load of subjects parked behind the municipal complex at 8:50 p.m. The van was leaving as police walked around the building. Police recorded the license number and it checked out OK.

• May 14: Police took a report on a window broken by rocks at the Coshocton Grain terminal.

• May 14: Police were dispatched to a report of an active struggle at the Kroger store between a shoplifter and a store security officer. While enroute, police were advised that the suspect had jumped into the bed of a red pickup truck now heading east on US 40. That vehicle was eventually corned and stopped on Eagle Court in Buckeye Lake by the Licking County Sheriff’s Office and Buckeye Lake and Union Township officers. Police continued to the store where the security officer was found laying on the sidewalk in pain. She told police that the woman driving the pickup truck tried to run over her. The store officer had been moni- toring the man and woman due to their suspicious behavior in the store. Another employee told her that the man was putting alcoholic drinks under his clothing and was heading for the door. The security officer confronted the man outside. He allegedly threw one of the bottles of Nuvo at her and dumped three others on the ground. He also allegedly threatened to hurt her if she didn’t let him leave. When he reached into a pocket, she sprayed him with chemical spray. Kroger employees were struggling with the man when the driver ran to the pickup truck. He allegedly told her to “run the b**** over.” The truck sped toward the employees. When the man was caught in Buckeye Lake, he claimed he was having a heart attack. He was taken to the hospital accompanied by a Union Township officer. Rosezetta M. Chandler and Lowell Jones, both of Columbus, were charged with aggravated robbery which is a first degree felony. Both have been indicted and are being held in the Licking County Jail awaiting their trials. Police discovered Nuvo bottles in the truck that were traced to other stores.