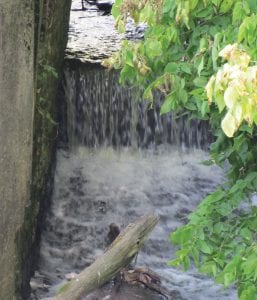 Several alert readers discovered Wednesday morning that precious lake water was flowing out of the fish hatchery canal into a creek that is a tributary of the South Fork of the Licking River. About four inches of water was still flowing out of the four to five foot wide outlet channel late Wednesday afternoon. The canal from the Seller’s Point spillway feeds the fish hatchery ponds. All the hatchery ponds appeared full, but apparently the outlet from Buckeye Lake to the canal was still open or the canal had been overfilled. Placement of an additional 2 x 6 board in the outlet (see photo below) would have stopped the flow. A Wednesday afternoon email to ODNR Dam Tender Peter George seeking an explanation was not answered by press time late Wednesday evening. The lake level continues to drop since ODNR’s May 26 announcement that the Buckeye Lake Village Spillway would be closed to allow the lake to increase a maximum of two feet. According to the USGS gauge at Millersport, the lake level is down about 1 3/4 inches since the spillway outlet was closed. Evaporation is the primarily culprit, but discharging lake water through the fish hatchery canal contributes. Other lakesie observors place the loss closer to four inches. Beacon photos by Charles Prince. 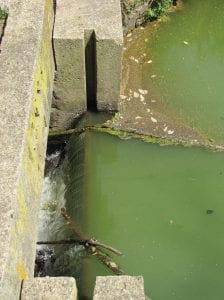