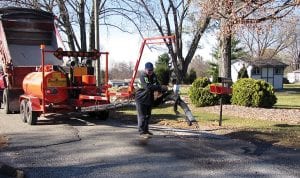 Licking Township officials believe they have already saved thousands on road repairs thanks to their new $65,000 Dura Patcher unit. They have put about 40 hours on it. The self-contained trailer unit only requires a dump truck to tow it and refill its hopper for crushed limestone. A large diesel engine drives an air compressor which can provide an air stream to first clean out pot holes, cracks and the roadway surface. Next an emulsion that acts as a binder for the limestone can be sprayed by itself or with #8 or #9 crushed limestone. The emulsion can be shut off, allowing for still sticky areas to be covered with a final limestone cover. Trustee Dave Miller, who has primary responsibility for township roads, says the savings comes from being able to just repair the alligatored or cracked areas rather than having to chip and seal the entire roadway. By sealing these areas, water can’t get under the surface where it breaks up more asphalt during the freezing and thawing season. The process also makes pothole repairs permanent since it cleans out the hole and then the emulsion/limestone mixture binds tightly to the existing roadway. Most winter potholes must be filled with cold mix which often has a short life. Road worker Rob Mills operates the counter-balanced wand, filling cracks and resurfacing alligatored areas on Larason Avenue Wednesday. The system includes a horn to signal the dump truck driver to move ahead or stop. Miller said trustees had seen two demonstrations on township roads over two years before deciding to buy the unit this summer. Those demonstration repairs are still holding. Beacon photos by Charles Prince. 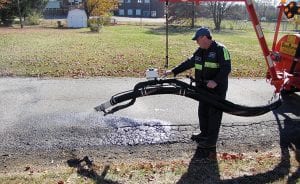