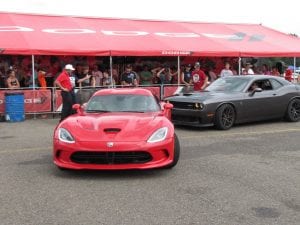 Several thousand Mopar fans got a free thrill ride as part of the Dodge Rocks! Tour at National Trail Raceway last weekend. The Drag ‘N Drift Thrill Ride featured a 2015 Dodge Viper GTS, a supercar packed with 645-horsepower, at left above, and a 2015 Dodge Challenger SRT Hellcat, the fastest muscle car on the planet with 707-horsepower. Professional drivers took a front seat passenger to 70 mph+ in about 500 feet before turning around to drift at high speed through a slalom course. This writer’s Viper driver was former Indy car driver Jimmy Kite who drove in five Indy 500 races. The Hellcat was driven by Stephanie Reaves who has the distinction of being the first woman ever to earn a professional motorcycle drag racing license, qualify at a NHRA national event and became a factory race driver for General Motors. Beacon photos by Charles Prince. 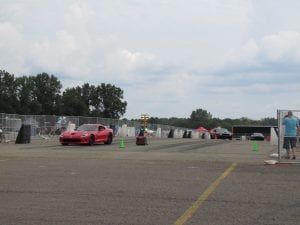