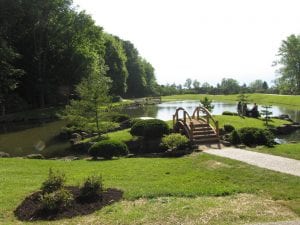 On the 50th anniversary of its dedication, The Dawes Arboretum reopened its popular Japanese Garden, following a two-year renovation. Above, from left to right, Henry Hauser, Trustees Chair; Luke Messinger, Executive Director; and Consul General of Japan, Dr. Katayama cut the ribbon for a special preview for donors last Saturday. This was the garden’s second renovation. Trails through the garden have been updated to provide accessibility for all visitors. The 1,800 feet of trails have been rerouted to give better access to the garden and were paved with an exposed aggregate, to keep the feel of gravel while making the path easier to walk on and maintain. The Resting House has been renovated while maintaining its traditional minimalist style with cypress wood and a simple shape. The garden has also been expanded to include a new Katsura tree forest with four kinds of traditional trees that blend into the existing trees in the area. The pond’s stepping-stones have been set so that they are no longer under water. Bridges to the two islands in the garden have been replaced with new white oak bridges original to the design and built from trees native to Licking County. The garden’s original designer, Dr. Makoto Nakamura, returned for four days last August and was consulted closely on the renovation. Beacon photos by Charles Prince. 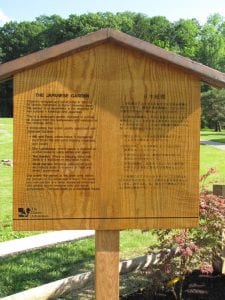 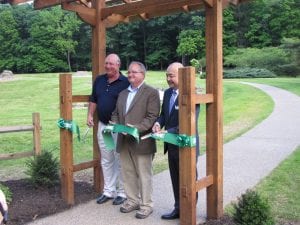