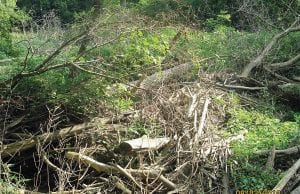 The photos above were two of more than a dozen Hebron Administrative Assistant Linda Nicodemus presented to village council members at their August 8 meeting. Nicodemus recently inspected the portion of the South Fork of the Licking River that runs along the village’s southern corporation limit. Hebron is participating in the Licking County Soil and Water Conservation District’s Licking County River Roundup on Saturday, Sept. 8. Her focus was assessing the amount of trash that cleanup volunteers would encounter. She found a massive log jam just 200 yards east and downstream from the downstream endpoint of ODNR’s long delayed Licking River Channel Improvement project. Bids will be opened August 16 for the estimated $4.5 million project to widen nearly 3.3 miles of the South Fork channel from the Seller’s Point Spillway channel at Buckeye Lake to just east of the Ohio 79 bridge over the South Fork. It includes 295,000 cubic yards of excavation and 92,5000 cubic yards of embankment construction. Nicodemus estimated that the log jam is at least 100 feet long and believes much of the expected benefit from the channel widening will be lost as water simply backs up behind the huge jam. Council members unanimously agreed with her suggestion that they urge ODNR to remove the log jam either as an addendum to the open bid or as a change order once a contract is awarded. A letter will also be sent to State Senator Tim Schaffer who represents the Buckeye Lake area and is vice chair of the Senate Agriculture, Environment and Natural Resources Committee. Buckeye Lake Village officials and Union Township Trustees are expected to make similar pleas. Courtesy photos. 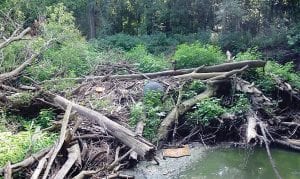