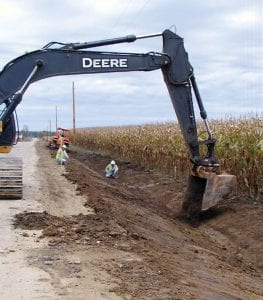 A Shelly Company crew checks the slope of a new drainage ditch on the east side of Cherry Lane in Walnut Township. Work started about two weeks ago on the first phase to rebuild the township’s narrowest road. The project will widen the road from its current 12 – 14 feet to a consistent 18 feet, add two-foot berms on each side, move fences back to the edge of the 60 foot right-of-way and construct new ditches. Utility poles have been moved to the east side and placed on the edge of the right-of-way. This phase runs from Blacklick Road north to the Licking County line. The Shelly Company was the low bidder at $294,261.10, which was considerably lower than the $348,079 estimate. Walnut Township’s share is $73,565 with the balance being paid by an Ohio Public Works Commission grant. Walnut and Liberty townships jointly own the road. Walnut Township takes care of the northern portion where it is being rebuilt, while Liberty is responsible for the southern portion. Liberty Township is not contributing to the project. Work should be completed by Thanksgiving. Walnut Township is seeking an additional OPWC grant to fund most of the cost for phase two which runs from Blacklick Road south to Ohio 204. Beacon photo by Charles Prince.