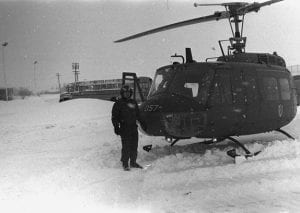 Do you remember the “Blizzard of ‘78” ? Forty years ago, in the early morning hours of Jan. 26, 1978, a severe blizzard struck Ohio, bringing 12-14 inches of snow with 50-70 mph winds and a wind chill of minus 70 degrees. In response, more than 5,000 Ohio National Guard Soldiers and Airmen were called to state active duty over an 11-day period in response to Gov. James A. Rhodes’ call for assistance to all 88 counties. The Ohio National Guard pressed into service 800 of its vehicles and 45 helicopters to evacuate stranded motorists, deliver supplies and remove snow. In addition, armories were opened to house and shelter those citizens who were stranded or had no heat. The “Blizzard of ‘78” would be recorded as the most severe snowstorm in Ohio history, amounting to almost $210 million in damage across the state. Photo courtesy Ohio National Guard.