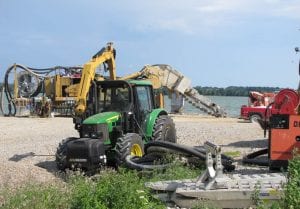 Looking somewhat like an erector set dinosaur, the giant one pass trencher is now (August 2) at Seller’s Point after completing the West Bank test section. The contract listed both an early start and late start completion date of April 24 for the test section. Its completion is some 90 days behind the schedule. At Seller’s Point, according to project spokesperson, Ian Nickey, the trencher “will complete the small section between the north-east side of Sellers Point spillway and the causeway in its current configuration.” Then it will track to the North Shore staging area where the cutting chains will be reconfigured before it starts its 4.1 mile trek down the stability berm to install the buttress wall. Beacon photo by Charles Prince.