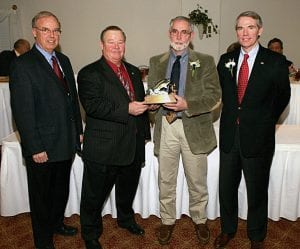 The League of Ohio Sportsmen named Tim Mason of The Dawes Arboretum Water Conservationist of the Year at its Annual Conservation Awards Banquet in Marietta. Mason was cited for his promotion and education of the public on the value of wetlands in Ohio and his dedication in the promotion of wildlife habitat. Above, League President Larry Mitchell presents Mason with a Black Bass statuetee as keynote speaker and former U.S. Congressman Rob Portman, right, and League Vice President Dan Olszak congratulate Mason. The League of Ohio Sportsmen’ mission is “supporting conservation, restoration and education that promotes the wise use and enjoyment of our natural resources including sound wildlife management.” Courtesy photo.