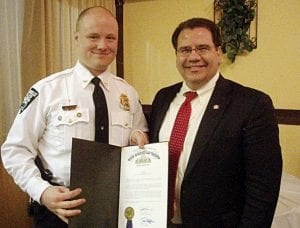 State Senator Tim Shaffer presents Thornville Police Chief Nick Garver with a letter from the Ohio Senate honoring his selection as Perry County’s Law Enforcement Community Officer of the Year for 2008. Garver was presented the letter and a plaque during a recent awards banquet at the F.O.P. Lodge in Lancaster. He was nominated and selected by his fellow officers in Perry County. Fairfield County Municipal Judge David A. Trimmer was the guest speaker. Courtesy photo.