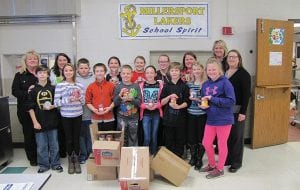 The Millersport Elementary School Student Council didn’t forget the community’s four-legged family members this year when they decided to help sponsor a pet food drive through Meals on Wheels to collect canned dog and cat food for local families in need. In all, they collected about 340 cans of pet food to be distributed throughout the community. “We started this about six years ago when we saw the need,” said Fairfield County Meals on Wheels Director of Operations Cindy Wells. She said it became apparent some Meals on Wheels recipients were offering significant portions of their meals to their pets, so they began asking schools to collect pet food donations. Fairfield County Meals on Wheels Executive Director Anna Tobin said only four schools, including Millersport Elementary, responded. She thanked student council members and their advisor, Millersport teacher Katie Galbreath, for accepting the challenge and and conducting a successful drive. Beacon photo by Scott Rawdon.