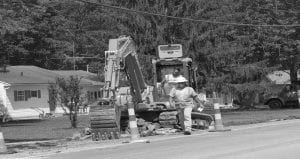 Four years in the making, Hebron’s federally funded South High Street Sidewalk Enhancement project is now under way, with a goal be complete by the Hebron Music and Arts Festival, if possible, in September, said Hebron Administrator Ralph Wise. Bids came in much lower than ODOT’s $880,000 estimate. Shelly & Sands, Inc. was awarded a $669,000 contract. Once complete, the new and in some places enhanced sidewalk, will start at the Chestnut Lane entrance to the Lake Forest subdivision and head north to Main Street. The fivefoot wide sidewalk runs on the east side of South High Street in front of Lake Forest then crosses to the west side of the street until it cuts through Canal Park to reach Main Street. Two existing footbridges in Canal Park will be replaced. The project includes decorative lighting and benches. It is one piece of a larger three-part project to improve pedestrian access throughout the village. In 2018, Wise anticipates the village will extend a sidewalk along North High Street to McDonald’s. Beacon photo by Scott Rawdon.