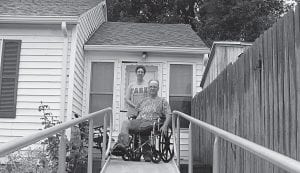 Hebron residents Jack and Jan Yocum stand atop a wheelchair ramp donated Aug. 17 to Jack, a member of the Men’s Auxiliary VFW Post 1388, by his fellow members. Yocum has been in and out of the hospital the past several months. “Now I know he can get out of the house safely on his own if he has to,” said Jan, Jack’s wife. The long metal ramp features a shallow incline, rails, and sandy paint to provide traction. Jack said his mobility was limited after the amputation of his left leg and right toes. The old wooden ramp was too steep and slick for him to operate on his own. “I would especially like to thank ‘the crew’ for their hard work, consideration, and craftsmanship,” said Yocum. He thanked Bob Schilling, Rick Vanoster, Jack Backus, Ralph Sullivan, Joe and Pete Krammer, Custom Welding, and Fisher Marina. “Our thanks and gratitude aren’t enough for what you have given back to my wife and I,” said Yocum. Beacon photo by Scott Rawdon.