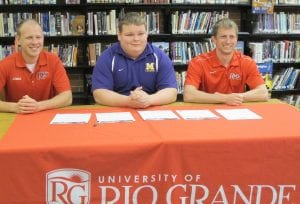 University of Rio Grande director of track & field/cross country Steve Gruenberg has announced the signing of Millersport High School’s Sammy Little for the 2014-15 school year. Little, a 6-foot-2, 345-pound thrower, was a first team All-Central District and a second team All-Mid-State League performer for head coach Steve Pierce’s Lakers as a junior. Little, who was also named his team’s Most Valuable Thrower and Most Valuable Field Event Athlete, competes in the discus, shot put and weight throw. His personal-best marks include 120-5 in the discus, 46-3 in the shot put and 31-7.75 in the weight throw. Little is the son of Joe and Stephanie Little of Millersport. He is joined by coaches Nick Wilson, left, and Steve Gruenberg. Photo courtesy University of Rio Grande.