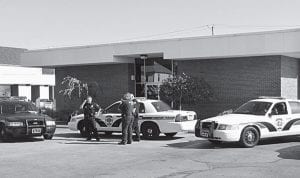 A lone gunman robbed the Hebron branch of Park National Bank just after 3 p.m. Wednesday. Hebron Police Lt. Larry Brooks said the gunman was a white male in his mid to late 20’s. He was wearing a hoodie with a bandanna across his face. He displayed a handgun and left the area on foot with an undisclosed amount of money. A Licking County Sheriff’s Office K-9 unit attempted to track the man. No one was injured during the holdup. FBI agents arrived quickly after the incident and were interviewing witnesses. Beacon photo by Charles Prince.