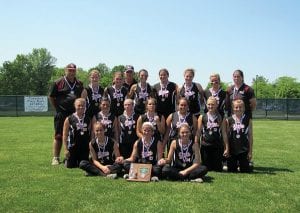 Liberty Union Lady Lions’ road back to the state softball championship in Akron ran into a dominating pitcher at the top of her game Saturday in a Division III district final at Pickerington Central. The 2011 Division III state runners-up threatened in the first inning after Sarah Klopfer walked, Kelly Mix singled and a Bloom-Carroll throwing error loaded the bases. Lady Bulldogs freshman pitcher Taran Alvelo got out of the inning with a strikeout. She then held the Lions hitless and finished with 16 strikeouts. The Bulldogs scored the game’s only two runs in the third on a lead-off home run, walk, bunt sacrifice and a double. Those were the only hits that senior ace and four year starting pitcher Sarah Klopfer gave up. She struck out 10, as she and the Lions finished with a 24-4 record. Bloom- Carroll moved up to No. 2 from No. 4 in Division III final state poll released Monday. Liberty Union fell to No. 6 from No. 2. The Lions had been ranked No. 1 before three onerun losses dropped their record to 23-3. This will be the first time in four years that a lake-area team won’t be competing in the state softball championship. Lakewood’s Lady Lancers won Division III state championship in 2008 and 2009, and the Division II state championship in 2010. The Lions were Division III state runnerups last year. This year the Lady Lancers lost 7-4 to Columbus Bishop Hartley in the Central District semi-final. The loss broke a five year streak of district championships for the Lancers and nine district championships in 10 years. Millersport’s Lady Lakers beat Morral Ridgedale 10-9, then whipped Tree of Life Christian 12-0, before falling 8-3 to Newark Catholic in the Division V district semi-final. Sheridan’s Lady Generals lost 10-0 to Circlevill Logan Elm in the first round of their district tournament. No lake-area baseball teams will be heading to the state championship in Canton. Lakewood had two tournament wins – 6-0 over Hamilton Township and 4-3 over Whitehall-Yearling – before falling 2-1 to Big Walnut in the district semi-final. Sheridan beat Circleville 8-7, then lost 2-0 to Chillicothe Unioto in the district semi-final. Liberty Union lost 4-1 to Centerburg in the second round of the district tournament. Wellington School beat Millersport 10-0 in the first round. Beacon photo by Kendra Edinger.